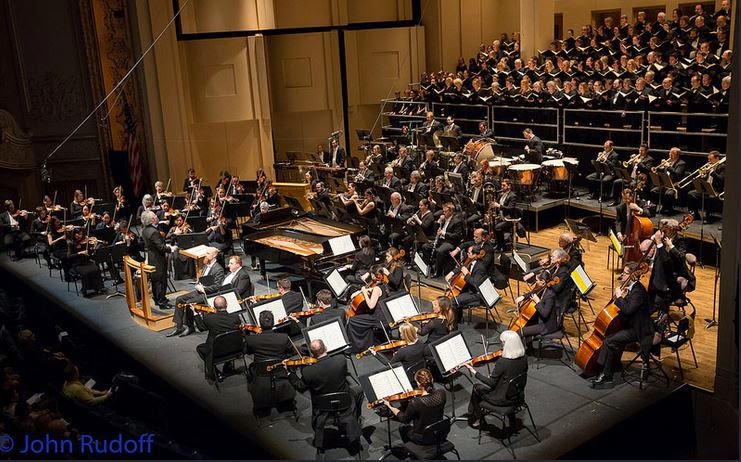 As music director Carlos Kalmar pointed out in his introductory remarks at the Oregon Symphony concert on Saturday evening (February 7), the pairing of Richard Strauss’s “Metamorphosen” (“Metamorphoses”) and Carl Orff’s “Carmina Burana” is a study of contrasts. While “Metamorphosen” is a slow, introspective piece for a chamber orchestra of 23 strings, “Carmina Burana” is a heavily rhythmic, “in your face” number for a full-sized orchestra, chorus, and soloists. Both pieces were incisively performed at the concert, but “Carmina Burana” needed more volume in order to make the maximum dramatic impact. I’m not talking about volume from the orchestra. The instrumentalists were plenty loud. I’m referring to fortes from the Portland Symphonic Choir. They needed to be a lot louder so that the combined visceral effect of text and music could come crushing into the audience. I’ve sung this piece many times in the very same hall (the Arlene Schnitzer Concert Hall) with the very same group, and I know for certain that the members of the PSC projected their voices like crazy whenever a forte was demanded. But as an audience member sitting in the lower balcony, I have to admit that I became perplexed that only half of the sound got out. It was a good thing that the Pacific Youth Chorus was amplified, and it seems that the PSC should have been amplified, too. The problem with the Schnitz is that the stage area for the choir and most of the orchestra is in a different room than the room where the audience sits. And since the Schnitz is a historical building, that situation will never change, because the change would involve cutting out the proscenium arch.

The soloists, on the other hand, sang from the extend stage area, which expands over the first few rows on the main floor. They did sound like they were in the same room with the audience. Laura Claycomb’s lovely soprano delivered all of the goods in her solos, including an exquisite D above high C at the apex the “Dulcissime” section. Baritone Tim Mix was a bit of a puzzle. He sang “Omnia sol temperat” and “Estuans interius” accurately but without much expression, then he became more animated in “Ego sum abbas,” but his falsetto blipped during “Dies nox et omnia.” The fellow who almost stole the show was tenor Marc Molomot. He turned his one solo, “Olim lacus colueram” (the swan who is being roasted on a spit), which is normally done as a lament, into a self-deprecating, humorous event that included terrific interaction with the men of the choir.

Speaking of the choir, it was expertly prepared by Steven Zopfi. The balance, intonation, pianissimos, and diction were superb. One of the most difficult sections in the “Carmina” to sing is the “In taberna quando sumus” segment that has a lot words that fly by very swiftly, especially during the toe-tapping “Bibit hera, bibit herus” section. The men did it all exceedingly well. I just wish that the final “Ios” would have erupted louder!

The concert opened with the “Metamorphosen,” which Strauss wrote as a response to the bombing of the Munich opera house in the fall of 1943. The sound from the 23 strings – with each musician on an individual part – was solemn but not sentimental. The threading of phrases, including a five note theme that was transferred among several players, was complex and intense. The culmination of the piece with a fragment from the funeral march in Beethoven’s “Eroica” Symphony added an extra dollop of gravitas.

One of the intriguing things about “Metamorphosen” is that – for most of the piece – not all of the musicians played at the same time. So it was fun to see which instrumentalist had a few bars of rest. Another element of interest was the various solo passages. It appeared that almost every musician got at least one exposed solo. Concertmaster Sarah Kwak had most, and she expressed each one with conviction.

Postscript: The OSO hasn’t scheduled the PSC for any work next season. Given the choir’s long standing relationship with the orchestra over many, many years, and its excellent musicianship under Steven Zopfi, I think that this is a mistake.
Posted by James Bash at 4:29 PM

Nice review, James. It was nice to see a packed house and an enthusiastic reception to the performance. However, having heard Carmina a few times, I find it hard to get too excited about the piece. Sure it has catchy tunes but I don't see that there is much of anything underneath all the bluster. I must confess to some disappointment that this was our one and only choral piece this year, especially considering we were treated to Britten's War Requiem last season, a far superior work in every respect.

Yes, I agree. There is a lot of big choral works that are being ignored.

Sorry you didn't hear enough forte from the choir. I heard from other audience members that the choir was plenty loud. You have certainly touched upon the problem with the Schnitzer. Wish there was an answer.

Two additional points: I believe PSC is slated to sing with the Symphony on the Beethoven next year. It was not announced in their marketing pamphlet, perhaps because the contracts had not all been signed, but as far as I know (and maybe it isn't really "official" yet?) it's going to happen. Certainly, three sold-out concerts is evidence enough that the Symphony and Choir should continue their long tradition of cooperation.

As for Curtis' comment, I would love to live in a world where great choral masterworks BESIDES Carmina, Beethoven's 9th, or, heaven help us, another Messiah, would be performed to sold-out crowds. Sadly, I do not live in that world, and neither does Curtis. Yes, a small percent of income is from ticket sales, but if shows don't sell out, it hurts other funding sources, too. You figure out a way to get 10,000 Portlanders excited about Barber's _Canata Profana_ or Stravinsky or good grief ANY oratorio besides Messiah.... I'm sure Meistros Kalmar and Zopfi would be eternally grateful to you. As would I.