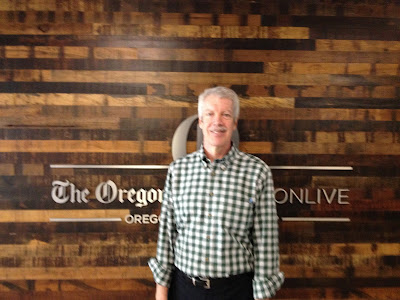 David Stabler, longtime classical music critic and arts feature writer for The Oregonian has officially retired from the newspaper. I caught up with him on his last day in the office, April 30th, to get some of his thoughts.

When did you start working for The Oregonian?

Stabler: I started in 1986; so it has been 29 years! I came here to be the music critic. I had never been a critic before. I was in Anchorage, Alaska, working for the Anchorage Daily News as an arts editor rather than as a critic. So in the role of a critic with The Oregonian, I was brand new, young, green. I didn’t know what I was doing.

Your music training was as a pianist?

Stabler: Right. I trained as a pianist all the way through school, including a couple of years in Europe doing piano. I am from Connecticut and got a masters from Eastman before studying at the Royal College of Music and then in Vienna because I wanted to learn German. Then I went back to London.

So why have you decided to retire from The Oregonian?

Stabler: It felt like time. Journalism has changed. We have lost a lot of staff, including all of our full-time performing arts critics. So a lot of that coverage fell to me: visual arts, music, dance, and theater. That has felt like a huge burden. It’s fun to do but difficult because you are never doing enough and able to respond well enough.

I have to be frank that the job changed. Posting online and getting hits, the stress of that is big. But I’d like to keep writing and pivot away from this full-time job. I will continue by freelancing back to The Oregonian and with other places as well.

It’s a real challenge to write about the performing arts today. We don’t get thousands of hits on a review; so they are hit-makers. But after talking with my fellow critics and arts writers in other publications, I’ve come to the conclusion that we need to connect more on social media. I never thought that I would say that! I’m way past the idea of it being a distraction. I now think that the way we preview and review performances is not the best way to approach things. Instead of writing formulaic articles, we have to find something that is more compelling. For example, with a symphonic concert, we could find someone in the orchestra to whom a piece on the program means something. Or write about the music itself and what it means, and really think hard and translate that for people who may not think about the orchestra. Meet them on their level. It doesn’t mean dumbing down. It means working harder to connect to people.

I feel like I’ve done that a lot over the decades to make, for example, to make Schubert compelling. Or why does Beethoven’s music resonate with people.

So I’m leaving these thoughts behind with the arts editor as I leave.

Who is the arts editor who has to consider all of this?

Stabler: It’s Jillian Martin. She will continue to honcho the arts coverage.

There are more music making groups in Oregon than ever before. Do you see that as a good thing or a bad thing?

Stabler: I believe in the theory of abundance. The more the merrier. The Oregon Symphony is coming off of a record-breaking season. They have never sold more tickets. Portland Opera is on an upswing and are about to go into an amazing experiment with a compressed summer season.

Many arts groups want to make Portland a summer arts destination. That has never happened before. Outside of Chamber Music Northwest, which is the largest organization with concerts in Portland, the city almost shuts down during the summer. I’ve learned how many groups want to collaborate, use marketing, and work with tourism more effectively.

Fort Worth Opera is the only company that has gone to a summer season in the last ten years. They have hung in there and endured the recession, and they see the change as being a success.

Basically, you have to sell the experience of coming to Portland and experiencing a music event, along with the hiking in the great outdoors, the food, and other great things that you can experience in the summer in the Pacific Northwest.

What are some of the highlights that you have experience during your time at The Oregonian?

Stabler: Jimmy DePreist was always a great guy to talk to. He always had time for me and lots of stories. I met him in his apartment, in Aspen, Colorado, and in New York a couple of times. He was terrific.

Leontyne Price was a wonder person to interview. She was very funny on the phone. She has a high speaking voice. I think it was in the early 90s. She was very worried that the ash from Mount St. Helens would affect her voice – even though the eruption had occurred ten years earlier.

Itzhak Perlman has the world’s lowest voice – at least on the day that I talked to him. He was especially a good interview on the subjects of perseverance, longevity, and being on the road day after day – it’s not easy for him to travel because he is on crutches.

I spent a year out in Eastern Oregon writing about an incredibly gifted cellist, Sam Johnson. He was 16 years old and a fabulous talent. The first time I heard him, he was 13, at the Community Music Center, we all fell off of our chairs. He had just won a national music competition. So, when he was 16, I thought that I would spend a year with him. But the year just went backwards. Everything disintegrated. He had had enough of the cello. He was fighting his parents. They sent him to the desert during the winter for three weeks where he had to learn how to strike flint to make a fire just to keep warm.

One of the great things about the job was the access to all of these extraordinary people. It was a real privilege to meet them and write about them.

Have there been some concerts that you have considered the best that you’ve experienced?

Stabler: Yes! One concert was by the Hungarian pianist György Sebők in Lincoln Hall. It was one of those pivotal moments in which what you thought before was one thing, but after hearing him play, your thoughts about the piano and music are changed. It blew my mind. I’m sorry to use a cliché. His playing was so profound, so simple, unadorned, so honest. I used the word “sincere” in the review. It just shook me.

I would say that the Oregon Symphony’s Carnegie Hall concert will go down as a real milestone for the orchestra. Everybody here knew what Carlos Kalmar had done with the orchestra, but it showed people in New York what was happening here in Portland, and they were shocked.

Carlos Kalmar in the first season playing Beethoven’s Fifth – I had never heard it faster, and I had never heard the orchestra play it so keenly. It was extraordinary. I remember Nancy Ives and the cellos making… smoke. Smoke was coming off of their bows! It was great! That signaled that this guy could take the orchestra somewhere.

I think that one of the great privileges that we have as critics is sitting in a concert quietly in the dark and listening to some of the best music ever written. We are not distracted. It’s a chance to meditate and connect with the performer. The singleness of focus is rare in this day and age.
Posted by James Bash at 9:30 PM