Book review of Orfeo - reviewed from a composer's perspective 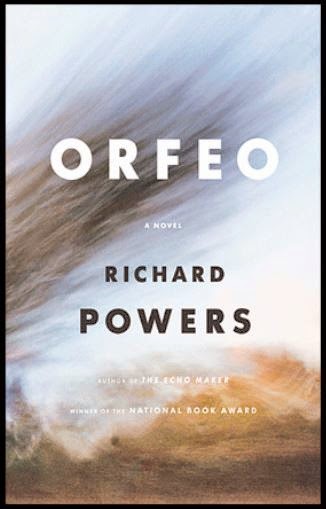 When first studying music formally, I spent some time with Claudio Monteverdi's “L’Orfeo”. A non-music-specialist housemate, listening in one day, grew curious enough to study the LP liner notes and finally commented, “Wow, these guys were like scientists!” Some forty years later I encounter a novel that engages this notion head on.

I’m not offering a literary review of Powers’ compelling novel. Before authoring a single word, I searched out and read over two-dozen reviews — some linked at the end. Most fulfill the expectations of literary criticism. I see no need in retracing their largely well-plotted maps. I’m writing to offer what I couldn’t find in any other review: a composer’s perspective. This is pertinent because Powers’ contemporary Orfeo protagonist is 71-year-old composer, Peter Els.

Els develops his craft about the same time I and most of my colleagues did. This is probably why, from the hundreds of insightful lines — mostly Els’ thoughts: memories, associations, reflections — coursing through the work, I find this, from his first significant destination, while on the lam, Urbana-Champaign (Little Darmstadt on the Prairie he calls it), where he is mentored and steeped in the avant-garde, to be the most prescient: “He was safest now in crowds. And crowds of the young, who tend to look away, embarrassed, from anyone careless enough to have let himself get old.”

Composers working today in the classical art-music tradition are rarely written about at length, fictionally or otherwise. Power’s composer, Peter Els, nearing the end of his life, is no longer taken seriously, even to the marginal degree of recognition he momentarily achieves, then hastily tosses away, for one nobly convincing reason, or perhaps for another not so flattering one. I’ll get to that momentarily. .

When finally done with traditional musical expression, to exercise his genitive compulsion, Peter Els returns to his first interest, chemistry, from which he is seduced into the arts by his first lover and muse — a passionate cellist with four-feet of hair, who ultimately breaks his heart, launching him into his first phase as a serious composer. In time we learn his compulsion to be nothing less than immortality for his “unheard” music, both the laboriously scored and that only imagined. He attempts this by composing in DNA, in the genes of bacteria that will propagate worldwide.

Such a scheme may sound farfetched, but it’s a fait accompli, emerging field — BioArt, rendered through biochemistry. In fact Powers acknowledges in this Powels.com interview http://www.powells.com/blog/interviews/richard-powers-the-powells-com-interview-by-jill/ that “Orfeo” is inspired by the bizarre story of NY-based, Steve Katz’s BioArt installations. Katz was arrested in 2004 by the FBI and prosecuted for four years as a bioterrorist — details here: http://www.democracynow.org/2008/6/16/art_in_a_time_of_terror.

The reader is engaged by an artist whose career spans the hotly (if narrowly) contested battleground of mind-to-late-20th-century, art music in the western classical tradition. After his DIY bio-art lab is raided, Els takes flight across the continent, media-branded the “Bioterrorist Bach”. The virtual slapstick in the unfolding of his legend through cyberspace underlines his fascination and annoyance with the evermore, literal, cyber ubiquity of music, making it at once inescapable, invaluable, undeniable and worthless.

Els is certain of his ultimate arrest and imminent decades-long detention by the post-9/11 Security State. His “road trip” leads to places and people important in his life; not in search of shelter, rather to bid adieu. Along the way we get pertinent deconstructions of essential music that informs his life and work: Gustav Mahler, “Kindertotenlieder”; Olivier Messiaen, “Quartet for the End of Time”; Steve Reich, “Proverb”; Dmitri Shostakovich, “Fifth Symphony”; Harry Partch, “Barstow”; Peter Lieberson, “Neruda Songs”. These substantiate both his personal and the larger “battleground” — a poetic distillation (perhaps) of Alex Ross’ “The Rest is Noise”.

The novel’s apex is Els recalling his monumental opera — a commission from New York City Opera — titled “The Fowler’s Snare”, an elaborate, three-hour, multimedia rendering of the 16th Century Münster rebellion — arguably Europe’s first “religious/socialist” rebellion. The premiere happens to fall just days after the dreadfully fatal, fiery, FBI/ATF, siege on the Waco, Texas compound of the Branch Davidian cult, led by charismatic Matthysian, David Koresh. Els is shocked and reels from the inevitable, topical parallel. He fails at numerous attempts to cancel the show, which is then an immediate success. Reviews heap praise on the composer for his “artistic bravery”, with one exception, a New Music Review article by El’s former college mentor and career-long critic: “One stroke of luck has turned a nostalgic exercise into something electric.” “The Fowler’s Snare” NYCO run is extended. Calls come in from companies around the country, begging to stage it. Els returns to his hermit cabin in the mountains of New Hampshire. He refuses permission for any further performances. His long-time collaborator and stage director, alone responsible for the commission, drives up to persuade him to relent. It ends in a fistfight. We never learn if Els feels his career-ending decision is honorable or cowardly.

I cannot remember the review that spurred me to rush down to my corner bookseller to order “Orfeo”. I do recall being motivated by claims of its urgency in our hysterically charged post-9/11 epoch. I simply had to read it, especially in light of my own evening-length, dance theatre scores, of the last decade, aimed at the heart of the Global War OF Terror. After premiering those works, my principal collaborator and I sometimes worried about ending up on the No-Fly List, but having since taken a number of incident-free international flight, we’ve concluded that Security State apparatchiks have dismissed us as a threat, at least for now. Shostakovich’s “Lady Macbeth of the Mtsensk District” shouldn’t have been a threat to Stalin, whose little review was just so many words, but then Dimitri’s colleagues began disappearing in waves. Still, he found a way to work. Who among us can compare our work to the bravery of his? Maybe Steve Katz.

Jack Gabel is a composer and poet, living in Portland, Oregon. In addition to nearly one hundred musical compositions, he authored a 1996 comprehensive history of electronic music for All Music Guide (no longer posted), several articles for Sforzando Magazine (last published ca. 2000) and most recently the narration for TOMAS SVOBODA • HIS LIFE • HIS MUSIC (audio biography CD, produced for Tomas Svoboda’s 75th Anniversary Celebration by Agnieszka Laska Dancers, 2014).

Richard Power’s “Orfeo” in other reviews:

http://www.economist.com/news/books-and-arts/21594962-master-novelist-mixes-music-and-technology-mood-music
Posted by James Bash at 11:37 AM