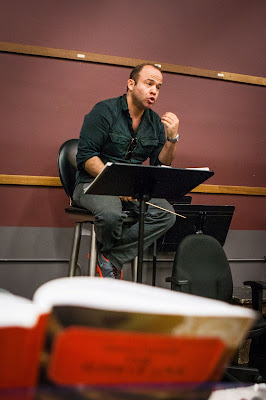 Nicholas Fox is finishing his second season as chorus master at Portland Opera. He is also the company’s assistant conductor and he works with the resident artists. Originally from Southern California, Fox delved heavily into piano and composing before earning a degree in orchestral conducting from Mannes College of Music where he received the Milani Memorial Conducting Fellowship in his final year of study. He worked on the staff of New York City Opera and the Martina Arroyo Foundation’s training program for young opera singers before coming to Portland Opera.This Friday, Fox will make his conducting debut in the Portland Opera production of Donizetti's "The Elixir of Love," which will be performed at the Newmark Theatre on July 17, 19, 23, 25, 30, and August 1st.

I met with Fox recently at the Portland Opera offices. Here is part of our conversation:

You are a pianist, but do you have training as a singer also?

Fox: I do not have a naturally beautiful voice. By working with singers for so much of my career, I understand a lot about the voice. But I don’t pretend to be a voice teacher. If I talk to singers about technique, it’s never as a voice teacher telling them what to do physically. I also wouldn’t tell an oboist how to make their reeds.

With your degree in orchestral conducting, how did you get into conducting opera choruses?

Fox: To pay the bills, while I was a poor, starving student at Mannes in New York City, I played piano for voice teachers. There’s a huge pool of voice teachers there, and I just played their lessons. Through the people I met in that world, I was hired by New York City Opera. Career-wise, things just happened that way for me.

Do you have absolute pitch?

Wow! That has its good points, but I suspect that it can be hard on you.

Fox: The most difficult thing is when something is not played in the right key... when something is transposed. Certain songs I will identify with the key they were written in. But some singers will transpose them to another key, because the original might be too high or low for them. That drives me crazy.

Is there much difference between conducting opera orchestras and symphonic orchestras?

Fox: I don’t see any difference between orchestral and opera conducting. Music is music, and conducting is conducting.

Do you have an affinity for Donizetti’s music?

Fox: Of the three so-called Bel Canto composers – Bellini, Rossini, and Donizetti – Donizetti is the one that I have the most performance history with. I would say that he has been the easiest for me to unlock. Rossini has always been a bit of a mystery for me. Rossini has a different take on drama than Donizetti does. It more of detached and ironic – sort of God viewing the mortals. Bellini is almost porcelain-like. There is something hauntingly beautiful about him.

Donizetti is just direct. There is no ironical detachment. He sympathizes with all of his characters including the less than savory ones. The music has a sweetness and beauty that is just wonderful.

Are there any difficulties in conducting this music?

Fox: There’s a paradox to it. If you look at the score of an opera like “Wozzeck,” it looks really difficult because it has a lot of meter changes, the harmonies are advanced, and so on. Then you open a score of a Donizetti opera, and nothing could look simpler. Yet that simplicity fosters the artists involved to take lots of unwritten freedom. That freedom, the moments of moving forward, the moments of pulling back, which are not on the page, makes conducting a Donizetti opera difficult. If you conduct exactly what is on the page, you could get a metronome to do it. But to make it come to life, it is everything that is not on the page. So that is what is difficult. It’s difficult in a different way than conducting Stravinsky is difficult. With Donizetti, it is the constant give and take that you have with the singers. To make it simple rather than simplistic is what is difficult about it.

How long have you been preparing for your debut?

Fox: Portland Opera asked me to conduct this about a year and a half ago. In terms of preparation, it’s merely studying the score – nothing more elaborate than that. I’ve been doing that intensely for the past two months.

This is my first time as the conductor, but I have worked on “The Elixir of Love” twice before. I worked on it at New York City Opera when I was on the staff there. I helped to prepare the chorus and assisted musically. I did the same thing when I was at the Martina Arroyo’s summer program in New York.

Since this production will take place in the Newmark Theatre, which has a smaller pit. How will that affect the orchestra?

Fox: We will be using a reduction of the score. The reduction is an arrangement for a smaller orchestra. The string part is exactly the same as that for full orchestra, except that there fewer string players are required. The winds and brass have been modified slightly for fewer players. For instance, instead of three trombones, there’s one trombone. Instead of two trumpets, there’s one trumpet.

The arranger, Bryan Higgins, has done a very skillful modification, reducing a full-size orchestra down twenty or so. I will be playing the harpsichord. It should all work well. Pat of my job is to make sure that everything on the stage and everything in the pit is telling the same story. It’s a wonderful challenge!

So you have your own score of the reduction?

Fox: Yes, I have that score. So I know exactly what the orchestra is playing. But I have about seven “Elixir” scores in all.

That should cover all of the bases. Toi, toi, toi!