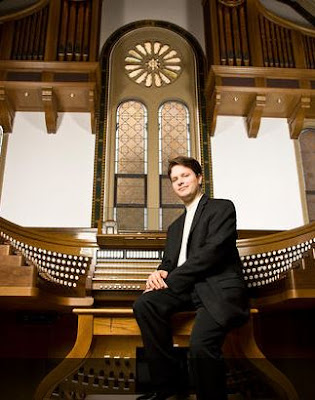 On Tuesday evening (July 7) at Trinity Episcopal Cathedral in Portland, the young and prodigious organist Paul Jacobs performed on the Rosales Organ (called by him one of the best in the country) a program of Bach, Brahms and Max Reger for an audience attempting to keep calm and cool due to the summer heatwave. Before the concert, fans were running in the rear of the church (the windows there are of the non-opening variety), then switched off before the artist entered. The background noise from the fans would probably have been distracting, but we in the audience did our level best to cool ourselves with waving programs, "psychological cooling," or attentiveness to the excellent music that came our way.

Jacobs has made appearances in Portland before, and with the Oregon Bach Festival. It was delightful and a pleasure to welcome him back to Portland this year, as most of the concerts of the festival are held in Eugene. Apparently low audience support in Portland contributed to the decision to limit Portland performances. I cannot speak for every other member of the audience, but the heat and the disappointment that more of the OBF was not on our "turf," were more than offset by this excellent organist and the music he served up in a rich stew of contrasts and profundity.

Jacobs, at 38, is the Chair of the Organ department at Julliard and is a concert artist of wide and broad experience. One has only to have a brief glance at his website to ask "How does he do this?" He performs all over the world and his repertoire is inclusive of everything from the Baroque to Stephen Paulus. He is energetic, and regales his audience with commentary that is at once informative, enchanting, and humorous. Doffing his jacket after the first piece, it amazed this reviewer that Jacobs "kept his cool," playing everything from memory and even offering a concluding encore.

Jacobs reminded us that Reger was known for saying that J. S. Bach is the "Alpha and the Omega" of the organ, thus the program opened with an "alpha:" Bach's arrangement of an original solo violin partita that morphed into the Sinfonia of his cantata "Wir danken dir, Gott," BWV 29. Jacobs proved his boundless energy and concentration in offering a concluding encore, the fugue from "Prelude and Fugue in A Minor" as the "omega." After some brief and engaging commentary, Jacobs went on to play, without interruption, three pieces for organ by Johannes Brahms: two chorale preludes, "O wie selig," and "Es ist ein Ros' entsprungen" that "sandwiched" (Jacobs' term) Brahms' muscular "Prelude and Fugue" in G Minor. Interestingly, it was emphasized that Brahms, perfectionist that he was, wanted his earlier works for organ destroyed, but was dissuaded by Clara Schumann. The "Prelude and Fugue" dates from that time. The chorale preludes, eleven of them in number, were reflective and meditative gems composed around the time that Clara Schumann died, and include the last music he composed in his lifetime. I imagine that anyone who has played the chorale preludes, as I have, reveled in the interpretation given by Mr. Jacobs: especially in "Es ist ein Ros'", when the melody, so familiar to us at Christmastide, is hidden in the rich texture, but brought out with skillful registration.

The rest of the program, some 48 minutes worth before and after a nice, cool intermission outside in the courtyard of the Cathedral, consisted of two large works by Reger: his "Fantasy and Fugue on B-A-C-H" and the massive, lengthy, "Introduction, Variations, and Fugue on an Original Theme." It has been said, of Reger's music, "Why did he not 'prune' or edit his work?" There's no handy answer to that question, other than putting Reger in his context of late 19th century Germany with models like Liszt to go by. And the result is thickly-textured harmony (even an amateur organist can derive great joy from Reger's harmonization of chorale tunes), sometimes bombastic, complex sounds, producing what Jacobs called a "glorious edifice of sound." That comment referred to Reger's work based on four notes "B-A-C-H" (German notation: for us, it is B-flat, A, C, and B-natural). Franz Liszt composed a similar work but Reger's possesses a richness about it that is incomparable and invites the listener not only to hear the four-note theme through the work but to enjoy the craftsmanship of the rich, sonic tapestry.

Making the evening more engaging for the concert-goer was the screen upon which was shown the organ console with the artist's hands and feet flying all over the keyboards. To see Jacobs' hands deftly handling the registrations (just a few odd flaws occurred when a reed stop inadvertently played on the pedal) so skillfully was sheer delight.

Before playing the massive, 30-minute-long, "Introduction, Variations and Fugue" by Reger, Jacobs spent a good deal of time inviting us into this work. He said that he "had to become the music," in order to possess its soul, and he bade us: "Be willing to go into its world." The artist spent a minute or so playing the theme, a tender bit of gorgeous music; rather than trying to find this theme throughout the work, I simply "psyched" myself into sheer enjoyment of it and tried my best to "go into [the music's] world," despite the heat. Having the lighting on "low setting" helped. The variations alternated between the jaunty, jagged, reflective and declamatory; that part of the piece is 20 minutes in duration, with the introduction (theme) and fugue each only five minutes in length.

As Jacobs pointed out, his hero Reger had a terrific sense of humor, corroborated by some historical evidence this reviewer saw online. When a music critic gave some of Reger's music an unfavorable review, he wrote to the reviewer: "I have your review before me in the smallest room of my house, and very soon it will be behind me." This reviewer would, I hope, be on Reger's "good side," as he thoroughly involved me in the richness of his music. It is to be hoped that Reger's music will undergo something of a revival in the 21st century. Already there is a "Max Reger Society" and a "Max Reger Festival," centered at the University of Indiana to help that occur.
Posted by James Bash at 9:17 PM