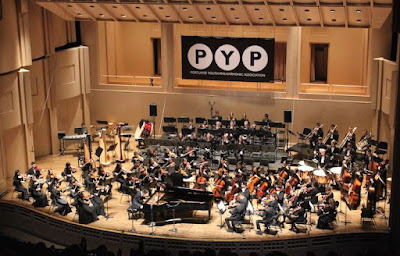 The Portland Youth Philharmonic jump started the first concert of its season at the Arlene Schnitzer Concert Hall on Saturday evening (November 14) with a program of firsts. First came Mason Bates’s techno-bleating “Warehouse Medicine,” followed by an exciting collaboration with teenage piano sensation Nathan Kim playing Prokofiev’s First Piano Concerto, and then the orchestra, under music director David Hattner, wrapped things up by charging in to Sibelius’s First Symphony. All three pieces were performed with verve by the young musicians, who left it all on the floor.

Although Nathan Kim is only a sophomore at Newberg High School, his command of the keyboard - combining finesse, technical mastery and artistic bravado – was astonishing. Fearless attacks, pinpoint entries and exits, and the ability to caress the keys with genuine feeling made the Prokofiev a pure joy to hear. I heard him play this piece incredibly well with the Vancouver Symphony (WA) a few months ago, but now I have to say that he has really made it his own. The orchestra accompanied him marvelously, and Hattner did an exceptional job of keeping the orchestra from overpowering the soloist at even the loudest passages.

The pulsating techno beat of “Warehouse Medicine” (which is one movement from a piece called “The B-Sides”) buzzed with raspy energy to open the concert. It was complimented by wah-wahing brass and accented interjections from various sections of the orchestra until the pattern of the beat changed. After the pattern became faster and looser, and the strings responded with an interwoven texture. At one point, the beat died away and the orchestral colors took on a cinematic quality. After the techno pulse returned, it seemed to urge the orchestra into a grand finale.

Perhaps “Warehouse Medicine” was another form of call and response with the electronic component doing the call. Hattner singled out a young orchestra member, who was sitting with a laptop in the cello section with a laptop. He took care of the electronica, and perhaps the orchestra will need him again if it does all of the movements from “The B-Sides.”

The PYP, playing Sibelius’s First Symphony for the first time in its 92 year history, sounded terrific. The solemn opening statement by the clarinet (Talia Dugan) and timpani (Sam Doby) deceptively set the stage for the emotional waves of music that followed. Gorgeous playing by the strings created dark somber melodies before surging ahead with spring-like ones. Choirs of horns and woodwinds added wonderfully to the atmosphere. The musicians negotiated the fleet passages at the beginning of the fourth movement with panache and made the finale a glorious triumph. Hattner and company deserved the kudos from all corners of the hall for the fine performance, which was espeically appropriate on the sesquicentennial of Sibelius’s birth.

After the enthusiastic applause subsided a bit, the orchestral strings gave a lovely and touching performance of Sibelius’s “Andante Festivo” in honor of one of its violists, Binyamin Klatchko, who died just short of his 17th birthday a few months ago. That's a sad note upon which to close a concert, but it was a fitting one that showed the maturity of the musicians.