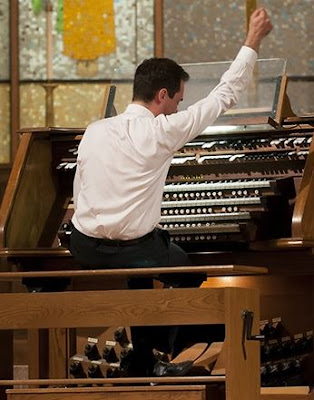 Christopher Houlihan will play the Rosales Organ at Trinity Episcopal Cathedral this Friday (November 13) at 7 pm in a concert that is sponsored by the Portland Chapter of the American Guild of Organists (donations will be accepted). This concert is part of a lengthy tour that has taken Houlihan across the US in a zig zag fashion through 20 states and cities. He already has two recordings under his belt and a group of admirers called the Houlifans. Not bad for a fellow who is only 28 years old. I talked with him over the phone a week ago. Here is part of our conversation.

Will this be your first time in Portland?

Houlihan:  Yes, it will be my first time to perform there and to visit the city.

It’s wonderful that you’ll be playing the Rosales, which is considered by many to be the best organ in the Pacific Northwest.

Houlihan:  For years, I have heard the Rosales Organ on recordings, and now I am really looking forward to playing it. It’s a very famous instrument and has a great reputation. I think that it will be a really good fit for the music that I’ll play in the concert.

I assume that you play piano as well as organ. How did you get attracted to the organ?

Houlihan:  I guess that happened when I was eleven. I had already been taking piano lessons for a few years, but I saw an organ in a church for the first time and was mesmerized by the sight and sound of it. I got hooked. I just caught the bug and eventually found an organ teacher and have been playing organ ever since.

At age eleven, did your feet touch the pedals?

Do you tour often?

Houlihan:  I give between 20 and 30 recitals a year. I have to get to the venue a day or two in advance and set up the music so that it will work on that organ, and get familiar with that organ. It’s kind of like being a conductor and coming in to work with a new ensemble. You have to re-rehearse all of these pieces that you already know but get them to work in this new situation, because every organ is so different from the next.

What do you do besides touring?

Houlihan:  Although touring is my primary thing, I am artist-in-residence at Trinity College in Hartford, Connecticut. I am also an organist at Church of the Holy Apostles Church in downtown New York City. They give me a lot of flexibility to travel and perform.

The program that you’ll be playing on the Rosales includes the Prelude and Fugue in B-flat Major by Henry Martin.

Houlihan:  Henry Martin is a composer in New York who was commissioned by Michael Barone, who is the host of American Public Media’s Pipedreams, to write 24 new preludes and fugues for the organ. This is one of two that have been entrusted to me to premiere. I’ve been playing this one since this past summer. It’s a very cool piece – very American with a mix of styles with a little Gershwin and a little Marcel Dupré the French organ virtuoso.

Houlihan:  Vierne was the blind French organist of Notre-Dame Cathedral in Paris. He had congential cataracts; so he could see a little bit. He would write his music on enlarged staff paper with a pencil and magnifying glasses. As his eyesight became worse, he had someone else write the notes for him.

He wrote six symphonies for solo organ. Vierne’s Fourth Symphony is really an exciting piece. It’s very personal, and because his life was so tragic, a lot of that comes through. It has big contrasts of angst, depression, and frustration mixed in with a beautiful romance movement that has a gorgeous melody and a charming minuet. It’s a colorful, wild piece that will sound great on the Rosales organ.

Of course, you have to play some Bach. You’ll perform Bach’s Prelude and Fugue in E minor.

Houlihan:  This is one of Bach’s more epic preludes and fugues. It is sometimes called “The Wedge” because of the fugue that starts on one note and splits out chromatically to an octave. So it’s like a wedge, starting in one place and then splits in half. Plus, it is like a fugue on steroids, because the fugue turns into a toccata fantasia. It’s a wild, enormous piece – totally Bach showing off everything that he could do.

The concert will begin with the Fantasy in E flat by Camille Saint-Saëns.

Houlihan:  It's a  fun, early Saint-Saëns piece that is an exciting and catchy way to begin the evening.

Do you have a photographic memory?

Houlihan:  No. I don’t have a photographic memory. It takes me a long time to memorize pieces. But it’s worth the effort for this beautiful music.

Do you live in a house with five organs that you get to experiment with?

Houlihan:  I wish that I did! I live in an apartment in Brooklyn. I practice at Holy Apostles in Manhattan and a couple of other places that let me use their organ. It’s tough to have a pipe organ in your apartment!

Do you have a new recording?

Houlihan:  I’ve got a Bach recording that is waiting to be released.

The organ is such a great instrument. It is great to know about the new preludes and fugues by Martin, but what is the situation of new compositions for organ?

Houlihan:  Composers are getting excited about it again. They can really explore a new frontier of sound. At Juilliard, a lot of the organists are working with composers in the composition department. They are writing a lot of new organ pieces.

The trickiest thing about writing for organ is that no two organs are the same, and that’s scary for a composer. You have to give the organist a bit of freedom to decide the colors and sounds.
Posted by James Bash at 4:01 PM