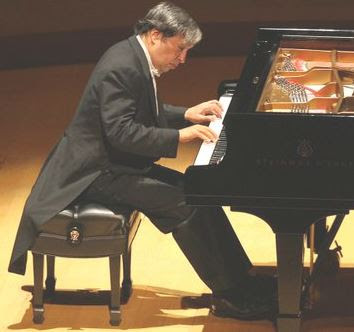 Acclaimed pianist Murray Perahia gave a brilliantly reserved performance of works by Haydn, Mozart, Brahms and Beethoven to a very large audience that filled most of the capacious Arlene Schnitzer Concert Hall on Sunday afternoon (April 10th). Perahia’s performance, which was part of Portland Piano International’s recital series, avoided emotional excesses in favor of a more restrained, classical style that worked well for the most part, but his playing didn’t put the concert into the transcendent sphere.

Right from the start, Perahia gave a clear-eyed, refined sense of Haydn’s Variations in F minor. Crystalline passages flowed effortlessly from the Steinway grand, and the slower, sadder passages were elegantly stated. But Perahia shied away from making more of an emotional statement at the end of the piece, which made the piece oddly unsatisfying.

Perahia loosened up a bit more with Mozart’s Sonata No 8 in A Minor. His playing was playful and almost carefree. He took extra care to make the softest sections wonderfully gentle. But his immaculate playing hinted at the tragic sensibility in the dissonances of the Andante cantabile con espressione, but he kept the mood confined.

In his playing of five selections by Brahms, Perahia used his impeccable control to allow the leading lines to be heard over top of the thick textures. The Intermezzo in A Major, Op. 118, No. 2 – easily the most familiar of the selections – with its beautiful, nostalgic melody, didn’t drip with sentimentality and instead flowed very naturally. His feather-light playing of the Intermezzo in E minor, Op 119, No 2 generated a quick burst of applause. The Ballade in G minor, Op. 118, No 3, Intermezzo in C Major, Op. 119, No. 3, and Capriccio in D minor, Op. 116, No 1 also received marvelous interpretations from Perahia.

The big mountain in the program was Beethoven’s Piano Sonata No. 29 in B-flat Major, known as the “Hammerklavier,” a near hour-long excursion that features some of the most demanding dynamic contrasts in the repertoire. Perahia launched fearlessly into the massive chords of the Allegro, and excelled with the blastissimo effects. He also successfully created a hot and cold atmosphere for the Scherzo in which jokey passages became briefly darker and almost sour before returning to their lightheartedness. He explored the gravitas and moody nature of the Adagio sostenuto with great success, evoking the sense of someone fighting through clouds to get to the sunshine. In the final movement (Largo; Allegro; Allegro resoluto), Perahia exhibited wonderfully delicate playing and execute the impossibly complex fugue section with terrific speed and dexterity. But the final measures were understated and anti-climactic – which was a real shame considering the length and breadth of the journey.

The audience rewarded Perahia with massively loud applause that brought him back to the stage five times. It seemed that people hoped to elicit an encore from him, but it was not to be. He looked exhausted by the end of the “Hammerklavier” and politely left the stage with a weary smile.

One odd thing that I found about the recital was that the piano and pianist were positioned in the center of the stage area, which was fairly far from the audience. It would seem that the artist would want to be closer, but the positioning gave me the feeling that Perahia didn’t want that closeness. As a result the performance atmosphere was not as warm as it could have been.
Posted by James Bash at 10:34 PM