PSU Opera camps it up with frothy fun-filled Fledermaus 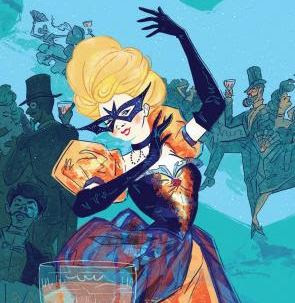 Infectious energy combined with outstanding singing and acting to make the opening night performance (April 22nd) of “Die Fledermaus” by Portland State University Opera a veritable hit. The singing was uniformly outstanding (alles auf Englisch) and the acting had a natural and spontaneous quality that generated buckets of laughter from the audience at Lincoln Performance Hall. Director Brenda Nuckton deserved high praise for encouraging the principals to embrace the full silliness of the story without compromising any musicality. Ken Selden led a spry and spirited orchestra, which supported the entire enterprise with a generous layer of schmaltz.

Set in fin de siècle Vienna, “Die Fledermaus” is a farce in which a high-class gentleman (Dr. Falke) gets revenge on his old buddy Gabriel von Eisenstein by playing on his vanity. Falke also applies the same idea on Eisenstein’s wife, Rosalinde, their maid Adele, and the prison warden Frank, tricking them into assuming different identities at a ball hosted by the incredibly wealthy Prince Orlofsky. Among the many hilarious moments, the best of all involves Herr Eisenstein trying to seduce an Hungarian countess, who is actually his wife in disguise. The masks finally come off at the jailhouse where identities are revealed, and everyone laughs it off by blaming the champagne.

Saori Erickson charmed everyone as Rosalinde, singing superbly throughout the evening. But she also showed excellent acting chops: melting into the arms of her old flame Alfred one moment, banishing him from the house in the next, and then fanning the skirt of her dress as wide as possible to hide him from her husband. Darian Hutchinson’s Gabriel von Eisenstein was full of bluster and amiable conceit, blundering without hesitation into Dr. Falke’s elaborate plot.

As Dr. Falke, Justin Birchell conveyed the figure of a masterminded who knew how to mix fun with gravitas. Hannah Consenz sparkled in the role of Adele, generating tons of laughs while executing all of the difficult vocal gymnastics with ease.

Ethan Reviere’s Alfred pursued Rosalinde with ringing high notes, a carefree bravado, and preening charm. Grace Skinner cut a dashing Orlofsky, the Russian prince, but her demeanor was more bemused than bored; so it wasn’t a big deal when Orlofsky finally did laugh.

Adam Ramaley created a wonderfully likeable Frank, hamming things up delightfully when he returned to the prison in a disheveled state. Jonathan Green defended himself with moral rectitude as Dr. Blind, the lawyer, and Savannah Panah backup of Adele as her loyal sister Ida. Scott Parker made the most of his role as the drunk and loveable jailer, Frosch (which, btw, means Frog auf Deutsche). In his commentary on singing of imprisoned tenor Alfred, he said “You think that’s bad. You should’ve heard him when I was sober.”

The chorus, expertly prepared by Ben España, sang with gusto, and they deftly exchanged partners while singing during the dance that was choreographed by Alexandrous Ballard.

Artistic director Christine Meadows deserved high praise for finding just the right opera for these students. She also found an exceptional English adaptation that was written by Quade Winter. All of the singers got spoken lines that included a terrific zinger or two, such as when Alfred proclaimed “It’s too late for scruples,” while dining with Rosalinde. And Rosalinde, fuming at her husband philandering intentions, said that she would “qualify him for the Vienna Boys Choir.” The audience responded with lots of laughter and a standing ovation at the end of the performance.

Finally, it should be noted that this review only covers one cast of principals. The PSU Opera program is strong enough to field a second cast, and I have the feeling that they are as remarkably trained as the one I heard.
Posted by James Bash at 2:00 AM