Matthew Halls talks about his work at the Oregon Bach Festival 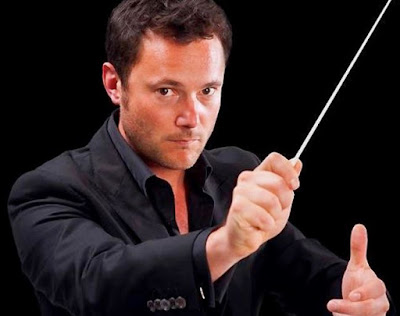 Matthew Halls, now in his third year as the artistic director of the Oregon Bach Festival, has been a busy fellow ever since he landed in Eugene a couple of weeks ago. The 40-year-old conductor has already led performances of Bach’s “Mass in B Minor” and of early Romantic works. Over the next two weeks, he will helm the premiere of James MacMillan’s “Requiem,” honcho young conductors through performances of Bach’s Christmas Oratorio, command the Berwick Chorus of the OBF in music of Bach and Frank Martin, and close the festival with a program of the Brahms Requiem and his Third Symphony. In between those concerts, the festival will offer concerts that range all over the map from organ (featuring Paul Jacobs) to Baroque music (Monica Huggett) to youth choirs (Anton Armstrong) to Viennese classics (Robert Levin) to new works (Gabriel Kahane) to more Baroque music (Rachael Podger) to puppet theater and to the one and only Punch Brothers band.

I talked with Halls to find out more about him and the sonic explosion that he has arranged in Eugene this year.

You started out as a keyboard artist before your conducting career took off.

Halls: Yes. I began as a pianist then at the age of 14 and then converted to organ. I spent a number of years working as an organist in several cathedrals in the UK. Of course, in the UK, it is impossible to be an organist without being a singer. So I was a countertenor for quite some time. Like many countertenors, I started off as a baritone and then an accident in shaving one morning caused me to discover a new range. [Laughs!]

From a combination of those things I worked with several conductors in the historical performance movement. I was the organist and harpsichordist for the Amsterdam Baroque Orchestra with Ton Koopman. That was during the time when he was recording all of the Bach Cantatas – an extraordinary period for me. I also did a lot of work with John Eliot Gardiner, William Christie, and others. But I was interested in their explorations into the 19th and even 20th Century repertoire. It seemed obvious that I would move at some point back into that world, but the historical performance bit was sort of an interesting chapter for me. I have ended up craving a little more variety in my musical life. Opera was the way in for me. I spent quite a number of years training as a conductor, chorus master, and music coach-répétiteur at several opera houses in Europe. I’m a silent singing conductor who loves working with orchestras and choirs; so OBF is a perfect fit.

It’s great that you have a program for upcoming conductors.

Halls: We are very selective about the conducting course. The course has been running for many, many years. Helmuth Rilling and Royce Saltzman really believed in the course and a commitment to young conductors to help prepare them for a career in which Bach’s music would be featured – and the challenges that would present. So in the beginning the program was specific to a study of Bach’s choral music. I am similarly passionate about educating young conductors because I can remember all too well how hard it is to find opportunities. Conductors don’t have an instrument that we can regularly practice on. I realized pretty quickly that the Oregon Bach Festival provides many opportunities during the festival for young conductors to get their hands dirty, so to speak, and feel how it is to be in front of an orchestra and choir. So this program is more than a one-day event. It goes on in the background through the whole duration of the festival. The conductor-students are working a daily schedule in conjunction with the fabulous director of the course, Edward Maclary, who is the director of choral activities at the University of Maryland. They will participate in conducting parts of the Bach’s “Christmas Oratorio” in the Discovery Series concerts, give conduct various choral works, and shadow me in my work on several programs.

As I travel about the United States and arrive in various cities, I always meet a choral or orchestral conductor who at some stage passed through the Oregon Bach Festival. It’s amazing how many people have worked with the OBF program.

Can you tell us about the MacMillan Requiem?

Halls: It is one of the festival events that I am most excited about. The world premiere of a Requiem Mass for chorus and orchestra by one of today’s leading composers of choral and orchestral music. MacMillan has a very strong religious background. He is very spiritual in his approach to music. The score is intriguing. The first thing that hits you is the very personal response to the requiem. It is through-composed, meaning that you don’t have that great division like you do in the Verdi and Brahms Requiems into standalone units. He doesn’t carve things up into movements. There are no huge pauses for reflection between the various texts. The work does have reflection points for various parts of the requiem texts which are very familiar to people who are used to requiem masses. All of the usual movements are there: the Libera me, the In Paradisum, the Offertorium, the Graduale, it’s all there – the Catholic liturgical requiem text – but it’s woven into this extraordinary symbolic tapestry. It starts in an incredibly radical way – all other requiem masses begin introverted, quiet, serene and calm. This one doesn’t begin that way. From the very beginning, one can tell that there’s another message – focal point. The opening statement seems to invoke the Last Judgement and texts that are associated with the Dies Ire – Dies Illa – “The Day of Wrath” and the “Day of Trial and Tribulation.” So you have this restlessness and impetuosity at the beginning. This statement immediately calms into the opening Requiem Aeternam text. Even while the reflective texts are explored always in the background there’s this idea of the day of judgement until final resolution with the In Paridisum, you get this sublime final section for both the soloists and the chorus and ending quietly. The orchestral score is lavish and rich and very challenging. It will be an extraordinary evening of music.

The Brahms “German Requiem” should tie in well with the festival.

Halls: There has been an underlying Brahms-Bach theme going on over the last couple of seasons. We explored Brahms’s Fourth Symphony and we related it to the Bach Cantata 150, which inspired the beautiful Chaconne at the end of the Brahms. The year before that I did the “Schicksalslied” with the orchestra and chorus. So Brahms the antiquarian, Brahms the Bach lover, fits very well into our Bach-inspired festival.

There is so much Bach going on during the festival and there must be. For many musicians, Bach is the center of our very existence. But I feel that one thing that has made the Oregon Bach Festival unique over the years is that it has the resources, which is quite rare, to explore at a very high level the choral-symphonic repertoire. So we have in our repertoire these great choral-symphonic war horses – great pieces of 19th Century literature, which we often use to close the festival or to celebrate a civic event.

Many people don’t know how many ensembles we have at the festival. If you look at the number of choirs, we have a profession choir which serves as a chamber choir and as an orchestral choir. We have the University of Oregon Chamber Choir, which is a fantastic ensemble that sings to a very high level. We have our vast youth choral academy. From time to time we have a choral teachers workshop. And the conducting students are encouraged to sing in the final concert as well. When we perform the Brahms Requiem, we combine all of those elements. We can create a choir that is unlike any other you’ve ever heard. It’s when we all come together – an absolutely exhilarating point – it’s like a celebration of the whole festival.

I assume that you are familiar with the Punch Brother’s music?

Halls: I am probably the Punch Brothers biggest fan. They are absolutely extraordinary. I love their music. I’ve been addicted to it for a long time. We weren’t sure that they would even come to a Bach festival. So asking them was a shot in the dark.

As an artistic director, I am interested in how it all links together. Even if people don’t see the thinking that has gone on behind the concerts, they might feel it. A lot of our audience is incredibly loyal, and they enjoy – taking the journey – our theme for this year – setting aside time during the festival’s two and a half weeks to enjoy the journey of the festival. The Punch Brothers - for me it is always nice to have a concert program that is not classical. In the case of the Punch Brothers and a lot of the programs that we present there’s an underlying link with Bach or with classical music. The Punch Brothers are outstanding musicians who have been inspired by classical composers by the music of Bach. They rework it with such respect and such love into something that is truly great. As serious classical musicians we have to listen to their music. These guys are geniuses!

Tell us about the Berwick Academy.

Halls: The Berwick Academy is a new pioneering program that we set up last summer to offer high-level exposure to final-year conservatoire and first year professional musicians working on historical instruments. The come from all over America and Canada – some are Juilliard graduates, some are Cleveland Institute of Music graduates, and there are many other conservatories represented. They get intense orchestral reading sessions to prepare concert programs. You get them with the best professional Baroque violinists and oboists and it’s amazing what you can do. Last year’s results exceeded all of our expectations. We bring a faculty of tutors from all over the world like Eric Hoeprich, one of the world’s leading exponents of the historical clarinet. He is a professor at the Jacobs School of Music at the University of Indiana.

Where will you go after the festival?

Halls: I will conduct at the Mostly Mozart Festival in New York in a program with Joshua Bell. In September I’m getting married. Later in the fall I will travel to Europe to conduct Mendelssohn’s “Elijah” with the Vienna Symphoniker.

Congratulations on all that. Will the wedding be in England?

Halls: It will be in Canada. My fiancé is from the Toronto area.