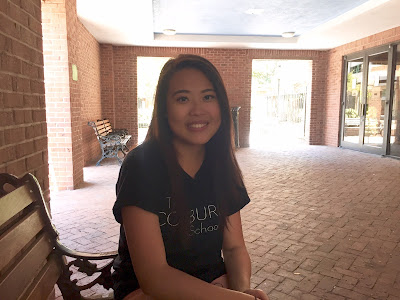 As I leafed my way through Spoleto Festival USA's elegant program (164 pages) that covers all of the performances (opera, dance, theater, and music concerts) that will occur in Charleston from May 26th to June 12th, I took a closer look at the roster of the festival's orchestra and saw that Natalie Yu is listed. Yu was the concertmaster of the Portland Youth Philharmonic and won several awards before moving on to conservatory. She is now studying violin with Robert Lipsett at the Colburn School where she is pursuing an artists diploma. In the meantime, she will be auditioning for orchestra and chamber music positions.

This is Yu's first time with the Spoleto Festival USA, and she says that it is going great. "I love it here!" she said. "It has a real strong sense of community. The whole town knows what's going on, and that makes it fun." She played in Helmut Lachenmann's "The Little Match Girl" (which I heard last night), the world premiere of "Grace Notes - Reflections for Now," and the gala concert.  All of the performances were conducted by John Kennedy, who is the festival's Resident Conductor and Director of Choral Activities.

After her gig with Spoleto Festival USA finishes, Yu will perform at the Aspen Music Festival. So you may see her there.