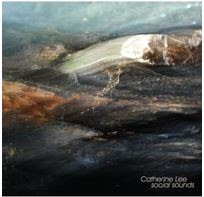 Earlier this year, oboist Catherine Lee released her debut solo album, fearlessly probing unusual sonic textures of new works. Entitled “social sounds,” the recording contains pieces for solo oboe by Dorothy Chang, Jerome Blais, Tawnie Olson, Emily Doolittle, and Lee that venture off-road into unusual tonal landscapes. The exploratory nature of the music on the CD plays well in Lee’s hands, because she has a lot of experience with the improvisation, having performed in ensembles led by noted improvisers, such as John Gruntfest, Gino Robair, and Tatsuya Nakatani. Lee has an extensive background as a freelance oboist and teaches at Willamette University, Western Oregon University and George Fox University.

The album’s title, “social sounds,” refers to Emily Doolittle’s “Social sounds from the whales at night” (2007). It features Lee playing the oboe d’amore to tape recordings of humpback, grey seal, and sperm whales. The whale sounds start out in the background as Lee casts a plaintive obbligato into the foreground. It is not long before her phrases and those of the whales seem to play with each other – a sort of communion in the midst of the ocean.

Lee’s performance of “Still” by Dorothy Chang (2006) creates a contemplative yet abstract mood in which tonality shifts back and forth as if from exterior to interior. Notes seem to sag and then leap forward in a spontaneous way that finally ends with a strange, mircrotonal buzz.

Lee gives Jerome Blais’s “Rafales” (2007) a wonderfully unhurried pace that allows notes to linger. Some of the notes have a long hang time and blur harmonically into the oncoming melodic line. A perky series of notes briefly gains enough momentum to contrast well with the predominantly forlorn sounds, including the eerily hollow tone at the end of the piece.

In Tawnie Olson’s “Plainsong” (2004), Lee offers a contemplative atmosphere that reflects the chants of medieval monks – although the piece has no direct quotes. Lee’s use of the English horn evokes a vocal quality that fits the music extremely well.

For the "Ten Tiny Dances South Waterfront Project" in 2008, Lee wrote “a tiny dance,” and, in this recording, she strikes a delicate balance between small movements and larger ones. Overall, the piece has an introspective nature that must have worked well for the dancers, who (according to the liner notes) “were restricted to moving within a space of four square feet that also contained a cement ledge, a banister, and a section of a small waterfall.

So if you are feeling adventurous, try "social sounds," which is available through CD Baby,Teal Creek Music, and the Canadian Music Centre.
Posted by James Bash at 12:58 PM

Thanx very much for this fine review, James!
Ah, Catherine Lee is one of my fave musicians in town - she has remarkable range, versatility, major chops & is a strong advocate for musics of our time.
As part of her usual spate of wide-ranging gigs, you can hear/see her give the World Premiere of fellow Canadian James Harley's new work, "Sonnet" for oboe & string trio, on a December 4th concert by The Free Marz String Trio @ the Community Music Center.
We are all very lucky to have Catherine residing with us here in Global Village PDX!