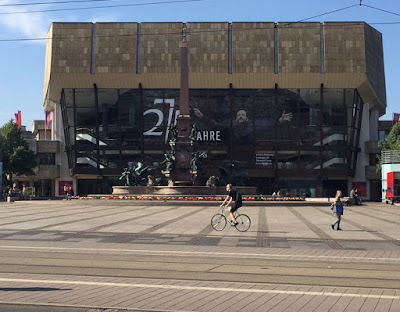 Over the past week I have been touring Germany with the Bach Cantata Choir. During a free evening while we were in Leipzig, I (and a few of my colleagues) heard Andris Nelsons direct the Gewandhaus Orchestra at the Gewandhaus. As you may know, Nelsons is the music director of both the Boston Symphony and the Gewandhaus Orchestra. So during the time we were in town, the orchestra was celebrating “Boston Week” with a variety of concerts, and the program on Friday, June 23, featured Stravinsky’s “Symphony of Psalms,” selections from Copland’s “Old American Songs,” Carter’s Concerto for Clarinet and Orchestra, and Bernstein’s “Symphonic Dances from West Side Story.” It was an outstanding concert in a hall with an excellent acoustic that makes the sound very lively.

The “Symphony of Psalms” was a little louder and more emphatic than I have heard before. The first movement had punch and crackle to spare. The Gewandhaus Chorus, expertly prepared by Gregor Meyer, used very little vibrato and were able to match the dynamics of the orchestra. Nelsons guided the last movement with slowly drifting gestures to get the ethereal mood. The only thing that would have made the performance better would have been a projection of stained glass windows.

Thomas Hampson highlighted the Copland songs with delightfully nuanced singing. “The Dodger” bounced along with a slight wink in the voice. He did “Long Time Ago” with a half sung-almost whispered style that added a hint of nostalgia. “Simple Gifts” was offered in a slightly declamatory style whereas “The Little Horses” contrasted a choppy style with an smooth and soft one that ended with a faraway falsetto. In “The Golden Willow Tree” the woodwinds wonderfully followed the story line to the bottom of the sea, and in the “Boatman’s Dance,” Hampson used a slightly nasal sound to create a countrified flavor. The ensuing applause brought him back to the stage for two outstanding encores: “I Bought Me a Cat” and “Shall We Gather at the River.”

The only complaint that I have about these settings is that at the end of several of the songs, Copland adds more instruments, which brings up the volume of the orchestra while the soloist has to sing in the lower range. Ergo, the last few words of several songs got obliterated. Perhaps Nelsons could have reduced the number of instrumentalists or just soften the tone. Fortunately, the text was printed in the program.

Jörg Widmann, a virtuosic clarinetist and composer-in-residence with the Gewandhaus Orchestra, was the featured soloist for Carter’s Clarinet Concerto. In that piece, Widmann moved to different areas of the orchestra for each of the seven movements. For example, he played next to the harp for the first movement, “Scherzando,” moved to the brass for the “Deciso” movement, and moved behind the violas for the “Tranquillo” movement. Only in the final movement, “Agitato,” did he move next to the conductor. Much of his playing was percussive and the notes jumped all over the place. He played the ultra-high notes smoothly and with care. After receiving sustained applause from the audience, he was given a bouquet of flowers that he then gave to the principal flutist.

The orchestra kicked into high gear for Bernstein’s “Symphonic Dances from West Side Story,” with the bass violins rocking out with their animated pizzicato-playing. The musicians showed no shyness when they shouted “Mambo!” Yet, they were equally adept at creating sensuous melodic lines that stimulated everyone’s of the memory of the love story at the heart of the music. Enthusiastic applause erupted from all corners of the hall after the piece concluded, and the musicians made sure that Nelsons received his due by not standing and letting the acclaim rain on him. Two retiring members of the orchestra received double bouquets, which was also thunderously recognized. It was a triumphant way to end the concert, and listeners left the hall with smiles and the feeling that they had experienced a very special evening.
Posted by James Bash at 1:30 AM