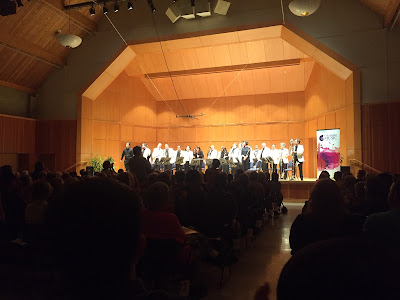 Single-reed aficionados and curiosity-seekers mixed with regular Chamber Music Northwest patrons to fill Kaul Auditorium to the brim at the Clarinet Critical Mass concert last Saturday (June 29). They were treated to an outstanding program that featured contemporary works, including a world premiere by Michele Mangani, and arrangements of familiar pieces, topping things off with a chorus of 30 instrumentalists that played Bach’s “Toccata and Fugue in D Minor.”

The concert began with Steve Reich’s New York Counterpoint, a pulsating minimalist work that faded in and out, creating a constant hum. Against the humming background, soloist Chad Burrow fashioned phrases early on reminded me of birdsong and later became more like jazz riffs. The ensemble of eleven was conducted with precision by Jose Franch-Ballester.

Next came Peter Schickele’s Monochrome IIII. It had a meandering, slightly jazzy line that led to thick, lush chords. After things got stirred up, the music alternated between another pleasant melody and a more agitated, freestyle section. The short work as wonderfully expressed by nine clarinetists under the direction of David Hattner.

The world premiere of Dance Variations on Themes of Mozart, commissioned by CMNW, proved to be a real crowd pleaser with composer Mangani leading a choir of 14. Taking the theme from Mozart’s Clarinet Quintet (K. 581), the piece sampled the waltz, tarantella, ragtime, tango, swing, bossa nova, and Czarda. The instrumentalists played with panache and were rewarded with an enthusiastic standing ovation.

A expert septet gave a rousingly evocative performance of Dukas’ The Sorcerer’s Apprentice in arrangement by Matt Johnston that contained a lot of tricky interplay. Kudos to Mark Dover, basset horn, and James Shields, contrabass clarinet, for the growly, woody sounds.

After intermission, Corrado Giuffredi an Franch-Ballester mesmerized the audience with Mangani’s Tango-Klezmer Duets. Their virtuosic playing brought down the house with animated tongue-in-cheek gestures that perfectly matched the music.

The grand finale of Bach’s “Toccata and Fugue” in an arrangement by Guido Six generated a panoply of sound that was impressively organ-like. Hattner conducted a chorus of clarinetists that spanned the full range from E-flat clarinet to basset horn, bass clarinet, contralto clarinet, and contrabass clarinet. The ensemble was amazingly articulate and expressive.

The concert got off to a late start because of last-minute ticket sales and the announcement of the winners of CMNW’s Young Artist Competition. With a collective $20,000 in prizes, the competition drew some of the best talent from around the world. Third place went to Haoran Wang (China), second to Iván Villar Sanz (Spain), and first to Sam Boutris (USA) in what the judges described as a very difficult decision owing to the high artistry of the participants.

Judging from the sort of collective single-reed madness that apparently infected Portland’s classical music scene, it seems that next year, CMNW could try for an oboe extravaganza. Or what about a trombone blowout. Or perhaps a bassoonathon! Who knows! In any case, CMNW struck gold with its weeklong celebration of the clarinet. Bravo!
Posted by James Bash at 1:30 AM