Here are the illustrations that show James DePreist (laureate music director of the Oregon Symphony) in the Japanese comic book called Nodame Cantabile, which tells the story of aspiring young musicians. In this chapter, DePreist appears as an inspiring role model for a conducting student. 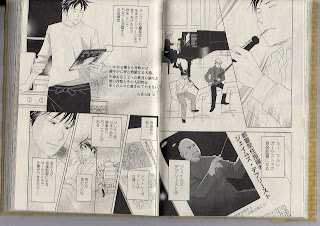 This illustration depicts him in a newspaper and states that DePreist is the Permanent Conductor of the Tokyo Metropolitan Orchestra. 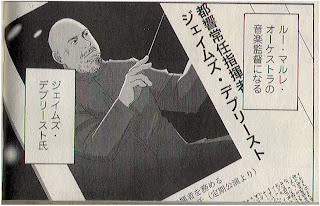 The next panel with DePreist says "I went to his concert in Japan, once."

The next panel to the left (students in audience) says "Happy night it was."

I don't know if any other conductors have appeared in comic strips or if there are any other comics that deal with classical music, but I think that it's terrific that DePreist is a character in this comic.

(Thanks to Fumino Ando for the comic book and the translation.)
Posted by James Bash at 7:45 PM