Greer Grimsley talks about singing and The Flying Dutchman 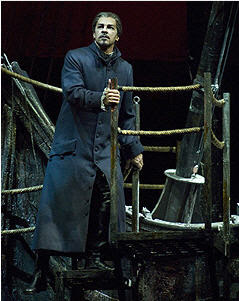 Greer Grimsley, the terrific bass-baritone who often stars in productions with the Seattle Opera, will be singing the title role in Wagner’s Flying Dutchman. I have heard Grimsley in several Seattle productions: Lohengrin, The Girl of the Golden West, Parsifal, and the Ring Cycle, and in Portland Opera’s Tosca, and have been impressed every time. I talked with him over the phone last week about the Dutchman and singing these big, heavyweight pieces.


How are rehearsals of the Dutchman going?

Grimsley: The rehearsals are going really well. I haven’t done Dutchman with Stephen Wadsworth before, but I find it very interesting, and we are having a great time. I’ve done the role of the Dutchman many times. It was one of the first Wagner works that I’ve stepped into.

How do you learn a role like The Dutchman?

Grimsley: This role fits me like a glove. I don’t have to work around places that cause me difficulty in learning it. In general, you want to allow yourself a least a month to learn a new role, study it and get it into your muscle memory.

The first two times I got to perform Wagner, an angel must have been looking out for me because a friend of mine was running an opera company in Germany and invited me to sing parts of Lohengrin and Dutchman, so that was a great way for me to get into it instead going directly to a staged operatic version. These were concert versions. So, that helped to cement both roles. Later I did my first staged version with Utah Opera.

When you are learning a new role, you are immersed in it. You have to go at it like a sprinter does. You have to choose your sections of music and then go after it for an hour or two to concentrate on it. Then you get some time away and translate the text, research it, work on the difficult passages that are rhythmically challenging. Once you start that, your mind is always there. You are thinking about it for eight hours a day. Vocal coaches help you to shape the music.

Grimsley: Fortunately, my wife is a professional singer. Her name is Luretta Bybee, and she was one of the Valkyries in Seattle's last Ring Cycle, and she'll be singing the role of Mary in this production of the Dutchman. Handling Wagner depends a lot on whether you have the natural gifts when you come into it. A lot of it has to do with what you were born with. A big component is breath control which is taxed to the maximum.

But on singing loudly -- once you get to a certain point in study, it’s more about relaxing into your body and allowing natural processes to work.

Is there an aspect of the Dutchman’s character that you try to stress?

Grimsley: Of course the brooding aspect of his character is stressed, but let's not forget about the human aspect of what got him into this predicament. Wadsworth and I agree about that and we are working on it. The Dutchman made the mistake of raising his fist to the heavens and saying that he will round the cape and the Devil damns him to this curse. It’s the story of a sea captain who wants to do the best for his crew and his ship and to get back to port no matter what. There is a human aspect to this. If one of us were a sea captain, we would want to get back to port, to get back to our families, also. You hear that in the first aria that he sings. It’s not just railing, it’s also his vulnerability. You want the audience to care about him. He had a responsibility for the crew who also want to get back to port to see their families.

How did you get started in this business?

Grimsley: It was a series of accidents. I was in drama club, and debate, and band in high school. In my senior year, I wanted to study archeology and was applying to colleges for that. A friend of mine was a character singer at the Met. He taught at my high school and encouraged me to think about music. So I did an audition and was accepted into the the Loyola School of Music in New Orleans. Archeology is a great hobby of mine, and it helps me to research opera. As a senior I thought that I would train classically and then go into musical theater.

Tell us about your work with Jane Eaglen.

Grimsley: Jane and I have known each other for a long time – 16 or 17 years. We were singing at the same time – not together – at Scottish Opera. She is a force of nature.

What do you have coming up for future engagements?

Grimsley: I will sing in New Orleans, Méphistophélès in Faust, and later the Berlioz Requiem in Buenos Aires. Then the Ring Cycle at the Deutsche Oper in Berlin. I’m coming back to Portland Opera to do Aida, then in Seattle for Tosca.

Do you have children who are interested following in your footsteps?

Grimsley: My daughter is doing really well with singing in her high school choir. She has a great voice. I’m encouraging her but not pushing her. My parents didn’t push me in any direction, and I've always appreciated that.