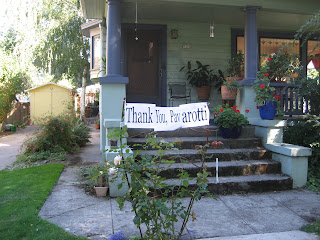 As I walked through my neighborhood (Irvington) in Portland a couple days ago, I saw a sign placed in one of the front yards, stating "Thank You Pavarotti!" So, I stopped by that house and chatted to the owner to find out about her connection to the great tenor. I was introduced to Nancy Olson-Chatalas, who teaches voice as an adjunct faculty member at Portland State University. She put the sign on her front lawn as a tribute to Pavarotti, and she told me of a time when she sang for him.

"I was in the finals of the International Arts and Letters competition," recalls Olson-Chatalas. "You had to have a high grade point average, be in certain age range, create a recital of five arias, work your way through the levels. And there was a lot of money involved if you won. The competition was held every year for about 12 years. I was in the 1979 finals which were held in Frank Lloyd Wright Auditorium in Scottsdale, Arizona, and Pavarotti was an adjudicator."

"Not really," says Olson-Chabalas. "I was excited. In the master class he said that 'talent cannot be taught' and he gave me kisses, and I tied for first place with Susan Robinson who later taught at Westminister College. Pavoratti stood behind me with his hands on my waist and said 'breathe into my hands,' and I did that, and he said 'good, good.'"

Olson-Chatalas is retiring from teaching voice at PSU and wants to concentrate on writing and hiking. She now only has five students, but she is still working on singing Schubert lieder.
Posted by James Bash at 3:16 PM

Ms. Olson Chatalas taught voice at Marylhurst back in 1995 or so, and I will always remember how she was so supportive in building confidence in using my voice. She probably doesn't know how much she influenced me...maybe she'll see this comment and it will bring a smile to her. with love, Lee Petrie