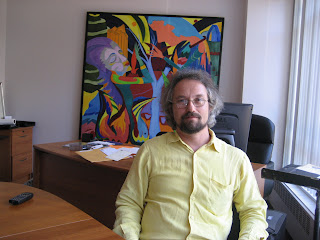 Last Friday I visited with Oregon Symphony’s director Carlos Kalmar at his office, and we talked about a variety of topics. At the end of our conversation, I snapped a picture of Carlos that you see above. Behind his desk is a large, colorful painting by George Broderick.

Summertime in Chicago, Baltimore, and Wyoming

Every summer, Kalmar conducts the forces at the Grant Park Music Festival in Chicago. This year they finished up two recordings under the Cedille Records label, and both CDs are scheduled to be released in April.

“All of the recordings are live,” says Kalmar. “We record the concerts live and then have a patch session. So after the concert, you take a shower and then return to the stage to re-record. It’s demanding.”

One recording features the music of Aaron Jay Kernis.

“We also recorded a Kernis piece called ‘Newly Drawn Sky,’” adds Kalmar. “Very colorful and excellent writing. Also, Kernis took out a movement from a concerto he wrote for guitar, violin, and small orchestra, and orchestrated it for a medium-sized orchestra. That movement is called ‘Too Hot Toccata’. It’s very jazzy, crazy, and technically difficult to the extreme.”

The other recording features mezzo soprano Jennifer Larmore, a rising star in the operatic world.

“This is an interesting recording if you look at what singers usually do when they put out a recording. Singers typically include flashy arias – lots of high notes and coloratura the usual stuff. So Jennifer and I and the orchestra went in a completely different direction.

We recorded music about four queens and none of the selections are operatic pieces. So this recording includes ‘Le mort de Cleopatra’ by Berlioz, Barber’s ‘Andromache's Farewell,’ Ravel’s ‘Shéhérazade,’ and Benjamin Britten’s ‘Phaedra.’ This is very late Britten, a very strange, wacky piece of music, and you think that it’ll never work. Then we got into it. Jenny got into it. I got into, and we thought that this is great and it’s scary, too.

Carlos also conducted in Jackson Hole, Wyoming at the Grand Teton Festival and he conducted Beethoven’s 9th in July with the Baltimore Symphony.

“I broke my own rule,” comments Kalmar. “I usually don’t do any work in July, but this year I did the performance with the Baltimore Symphony. It’s a great orchestra, and we are good friends.”

I also asked Kalmar to give me some of his impressions about the new concertmaster Jun Iwasaki.

“Jun is very energetic,” says Kalmar. “He has excellent leadership and relates to others well. He reads already very well. He has to adjust to me and the orchestra. There’s a learning curve, too. I try to listen to what the orchestra offers to me, and Jun offers a lot. It’s an exciting time, and I think that he will do very well. The training from conservatories is spectacular, and in every audition that we had, there were people who were very good, but we went for the outstanding. We went for the very special. So we selected Jun.”

Fall concerts with the Oregon Symphony

We touched briefly on the Van Cliburn gala concert (which was performed last week). Kalmar enjoyed working with Van Cliburn and noted that he brought his piano with him and felt very comfortable with the orchestra.

Valentina Lisitsa is filling in again – this time to replace an ailing Horacio Gutiérrez in a performance of Rachmaninoff’s Piano Concerto No. 2. Back in March, Lisitsa made a terrific last minute replacement for Denis Matsuev on Tchaikovsky’s First Piano Concerto.

I couldn’t help but ask how Kalmar first heard of Lisitsa.

“I found her in Chicago in 1998,” replies Kalmar. “She was the soloist at Grant Park for a concert that I didn’t conduct. I was guesting and for some reason staying another day. Jim Palermo, the festival’s artistic director, suggested that I hear this fantastic Ukrainian pianist. Now we’re talking music. She is really pleasant to work with and a wonderful pianist.”

Lisitsa’s appearance will a highlight on a program that features Dvorák’s “Symphonic Variations” and Strauss’s “Also sprach Zarathustra,” which American audiences still heavily identify with the film 2001 A Space Odyessy. So the Strauss piece will create a lot of splash as well. We’ve got terrific players in the orchestra.

This concert begins with Haydn’s Symphony No. 93.

“It’s one of the late ones – from the London group,” says Kalmar, “but it isn’t one of the famous ones. Still, it’s excellent Haydn.”

“This program has some unfamiliar music,” notes Kalmar. “People have heard the suite compilation “– 12 to 15 minutes – of Falla’s “The Three-Cornered Hat.” We will play the entire thing. It’s a ballet piece and it contains some extremely symphonic writing. It would be great to have music showcased by dancers on stage, but in this case the music has a lot of substance and carries the story well. I’ve always had great results with this piece.”

Also on the program is Berio’s “Folk Songs.”

“Luciano Berio was married to the American singer Cathy Berberian,” says Kalmar “and he wrote this for her. There are two versions. One is a different orchestration than the other. If you like the version we will play you can hear this piece in the chamber music version for seven players with Fear No Music and a mezzo-soprano a couple of months later. It’s a compilation at random of folk songs from very different countries and very different characters. It starts with two American folk songs. For me, not coming from this country, I always wonder if people know these songs. They should be able to recognize the first one: “Black, black is the color of my true love’s hair.” It’s the folk song in the original version with Berio redoing it. Beautiful with very intelligent writing with modern parts that are in conjunction with the original. Then the music travels to Armenia, France, three songs from Italy. It’s stunning what happens there. Also has a song from Azerbaijan. Every song is sung in the original language. So our guest mezzo soprano, Patricia Risley will show her skills in different languages.”

“This concert came about because I always wanted to the Berio folk songs,” continues Kalmar. “That piece goes well with the Three Cornered Hat’ because it starts with a trumpet fanfare, then you hear a female voice, but you don’t see the singer, then the piece evolves and in the middle of the piece you hear the voice again, but again you don’t see the singer. So that’s the connection with Berio.”

Carlos and the orchestra will explore the New World Symphony, This piece is considered an American piece. But what does that mean and is that true?

Laureate Music Director DePreist returns with one of his favorite soloists, Nadja Salerno-Sonnenberg to perform Bruch’s violin concerto. Also on the program is Rachmaninoff’s Symphony No. 2 and Wagner’s “Prelude to Act III of Die Meistersinger.” I’m looking forward to the Wagner piece, because it’s a natural fit for DePreist’s sweeping Romanticism, plus he never conducted Wagner (or if he did it was very rarely) during his tenure here. He recently conducted Wagner at the Aspen Music Festival (with soprano Jane Eaglen), and has, in fact, done lots of Wagner in the past two years.

“Lintu is extremely musical,” says Kalmar. “He works well with our orchestra. He has just been appointed the new chief conductor of Tampere Philharmonic Orchestra in Finland. That’s a very fine orchestra, and I’ve worked with them twice.”

“I’m looking forward to working with Finnish violinist Elina Vähälä,” states Kalmar. “We got some material from this artist from her agency. We think that she has something special. Of course, we always check references, too. Once I’ve worked with people and I like the way they work, I tend to still with them. The best example for me is the cellist Alban Gerhard. With him, music making is always great.”

For four weeks between the last week of October and the last week of November Kalmar will be ping pong his way around Europe. On October 28 he conducts Orquesta Sinfónica de Galicia at A Coruña (located in northern Spain), then he ricochets to Ireland where he conduct the RTÉ National Symphony Orchestra on November 9. Kalmar heads back to Spain to conduct the Bilbao Orkestra Sinfonikoa on November 15 and 16 (in a program that features the great pianist Benedetto Lupo), and he winds up on November 23 with the Flemish Radio Orchestra in Brussels

Kalmar knows how to live out of the suitcase.

The Samuel Barber scena to which Carlos was referring is likely "Andromache's Farewell," yes?

Yes Stephen; you are right! Thanks for pointing this out. I'll fix it straight away.