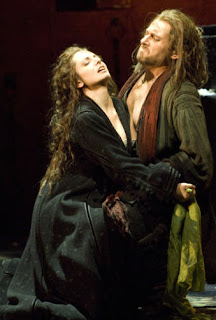 Seattle Opera’s brand new production of Gluck’s “Iphigenia in Tauris” received a glorious performance on opening night with a terrific cast led by Nuccia Focile in the title role. It’s great that Seattle Opera, acclaimed for its large-scale productions of Wagner’s operas, chose to tackle this rarely performed Baroque gem. This new realization has breathed life into a work that has only been sporadically performed since its successful premiere in 1779 in Paris.

A well-matched cast of principals led by Focile conveyed the ancient story of Iphigenia convincingly. Focile commanded the stage with an expressive and beautiful voice that swept us into the turbulent stream of emotions that ruled Iphigenia’s inner life. Her inner turmoil contrasted well with and strength and resolve she showed as the high priestess of the Scythians.

In the role of Iphigenia’s tormented brother Orestes, baritone Brett Polegato sang ardently. As Orestes best friend Pylades, tenor William Burden blended passion and lyricism with conviction. The brotherly love expressed between Orestes and Pylades was convincing, but it bordered on the edge of homo-erotic. As the bloodthirsty King Thoas, Phillip Joll bellowed about with a very wobbly vibrato. Michele Losier made an excellent impression as the goddess Diana.

An imaginative set by Thomas Lynch combined the look of an ancient temple with the heaviness of a tomb. The largest room, lit by oil lantern/sconces, featured a stone altar, and a gigantic statue of Diana, goddess of the hunt. Next to the large room was a smaller room that served as a jail and as a gathering place for the priestesses. A door from that room led to a narrow passageway to the outside and to freedom. A real highlight was how Clytemnestra (the mother of Orestes and Iphigenia) stood inside a see-through column of wall and placed one hand on Orestes and the other on Iphigenia. That was cool!

Stage director Stephen Wadsworth made sure that the action was as fluid as possible, despite the limited confines of the rooms. Thanks to choreographer Daniel Pelzig, the dancers overcame the somewhat cramped quarters with panache, although the brief highland fling by the Scythian warriors looked sort of hokey. The fight scene, choreographed by Steve Rankin, was one of the best I’ve seen on the operatic stage.

The scenery and sets were enhanced by the superb lighting of Neil Peter Jampolis. The dusky red clothing of the priestess blended well with the temple wall and the over all mood of this opera. Diana’s tight-fitting, shiny black leather or plastic get-up made her look more like cat woman than a goddess, but what the heck – you’ve got to give a goddess some leeway.

I heard lots of color and texture from the orchestra, which was paced expertly by conductor Gary Thor Wedow who also made sure that the volume near overwhelmed the singers. The chorus, prepared by Beth Kirchhoff, was outstanding, providing a balanced sound throughout the drama.

Extra note: After completing its run here, “Iphigenia in Tauris” moves to the Metropolitan Opera, which is the co-producer.
Posted by James Bash at 10:23 PM