Where you can hear Gil Shaham, Joshua Bell, Jean-Yves Thibaudet, and Orion Weiss in free concerts 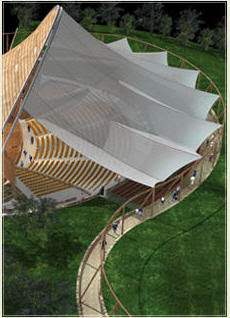 If you travel to Sun Valley, Idaho this summer you can hear Gil Shaham, Jean-Yves Thibaudet, and Orion Weiss play with the Sun Valley Summer Symphony for free. Yes, that's gratis! The Sun Valley Summer Symphony has offered free concerts for the past 23 years. So, they have some excellent sources for funding. This year the festival will take place under a new special tent (similar to the one in Aspen) called the Pavilion that will seat 1500!

A special benefit concert featuring the Mormon Tabernacle Choir and Denyce Graves takes place on August 9. That's the only concert that requires the purchase of a ticket.

Jennifer Teisinger is the Executive Director of the Sun Valley Summer Symphony. For two years, she served as the president of the Vancouver Symphony (WA).
Posted by James Bash at 10:35 AM