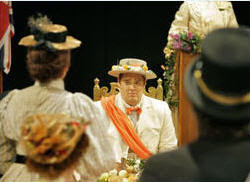 If you have ever been beholden to a cadre of willful, narrow-minded people, then you will have an instinctual understanding of the situation at the outset of Benjamin Britten’s Albert Herring. This comedy, albeit a serious one, depicts the struggle of a young man as he finds his way out of the smothering grip of his widowed mother and the expectations of the uptight, upright community. With three acts that run about three hours (including two intermissions), a cast of 14 characters (including important roles for children), a 13-member chamber orchestra, and complex music, Albert Herring is the most challenging opera to have been undertaken at the Hampton Opera Center. No matter. On opening night (March 14th), Portland Opera Studio Theater held everyone spellbound with a smashing performance.

Impressive were the young artists in the Portland Opera Studio program and the handful of seasoned pros that augmented the cast. Topmost in the lineup of young artists was Brendan Tuohy in the title role. Tuohy’s voice has all of the qualities that other tenors would give their right lung for. He can sigh, groan, ring it out, do whatever he wants, make it look effortless, and maintain beautiful tone.

Terrific also was Thomas Prislac as Sid, the assistant at the butcher’s shop, showing a remarkably strong and flexible baritone. At one point he eased into a high falsetto seamlessly – like butter melting on toast. Christopher Clayton created a memorable Mr. Gedge, with a golden baritone that any vicar would display proudly.

Brenda Harris sang the part of Lady Billows with an internalized sense of authority and up righteousness. Alexis Hamilton’s voice captured the forceful nature of Mrs. Herring with spot-on artistry. Jon Kolbet delightfully interpreted Mr. Upfold, the major of Loxford. Andrea Compton Sanchez, in the role housekeeper Florence Pike, echoed the pronouncements of Lady Billows in a forthright, decisive manner.

In the children’s roles, Amy Cole as Emmie, Colleen Heidebrecht as Maggie, Brice Todd as Harry, and Madison Wray as Cis were outstanding with their singing and acting. I loved they way that the girls boosted Harry over the shop door and prodded him to steal some apples. But there were numerous moments in which they shined.

All of the principals acted with panache as well. Tuohy created a despondent and frustrated Albert. Harris, as Lady Billows, dominated the town as an imposing autocrat. Apostolou, Clayton, Kolbet, and Beruan expertly portrayed townsfolk who followed in her wake. Hamilton, as Mrs. Herring, threatened her son with a firm hand or a paddle when needed. Prislac, as Sid, dared everyone with a cavalier attitude. Penn wonderfully revealed Nancy’s troubled conscience after she understood how Sid’s reckless action may have endangered Albert.

The highest vocal point of the opera came during the nine-part threnody in Act III. Harris, Apostolou, Clayton, Kolbet, Beruan, Prislac, Hamilton, Penn, and Compton Sanchez went full-tilt in a declamation of loss and suffering. In an intimate space like the Hampton Opera Center, everyone was absolutely drenched in the sound of the singers.

Robert Ainsley conducted with a graceful and skillful style that elicited an excellent sound from the orchestra and singers. Christopher Mattaliano provided clear and crisp stage directions that seemed very natural and kept the audience engaged. There were many, many small nuances that contributed to the actions of each character and are necessary for theater in which the audience sits only a few feet from the singers.

Susan Bonde designed well-crafted, traditional Victorian costumes for all of the characters, including the children. The sets, designed by Curt Enderle, displayed a large, opulent room in the home of Lady Billows, the Herring’s grocery, and the outdoor setting for the May Festival. The cast carried each piece on and off, and the grocery store setting was the most evocative of all – with fruits and vegetables piled high and beckoning to be sampled. Lighting designer Don Crossley accented each set expertly.

Extra credit note: According to The New Penguin Opera Guide, Britten wrote Albert Herring as “a companion piece to The Rape of Lucretia for performance by the same vocal and instrumental forces of the English Opera Group.” Since Portland Opera under Mattaliano opened the Hampton Opera Center with The Rape of Lucretia two years ago, he and the company have followed the same path.
Posted by James Bash at 7:49 PM

Extra extra credit note: And don't forget that next season the company will present Britten's third and final chamber opera, "Turn of the Screw."

I'm going to see it on Monday 3/24 - thanks for a great review, AH is, of course, not Peter Grimes, but still very good, I think, especially in a small auditorium - my first time in Portland, so I hope I'm not disappointed.