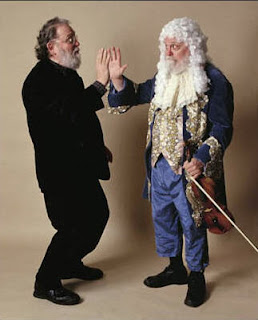 Because Peter Schickele is coming to Portland next week to do a concert with the Portland Symphonic Choir, I thought that I'd give him a phone call and talk to him about PDQ Bach.

What inspired you to create PDQ Bach?

Schickele: I’ve always been a fan of comedy. When I was a kid, I was a huge fan of Spike Jones who had a top-notch comedy band in the 40s and 50s. His best stuff was very funny. When I was a teenager, my friends and I had been listening to Johann Sebastian Bach’s “Coffee Cantata,” which is one of his few humorous works. One day, there were just three of us, my brother, me, and a guy named Ernie Lloyd, and Ernie was interested in technical things.. he later became a ham radio operator. He was interested in overdubbing with two tape records, which in 1953 or 52, was not as easy as now. You had to hook up two machines and match up several things. So the three of us got together and recorded the first movement of Bach’s second “Brandenburg Concerto,” doing all of the parts by ourselves. For me that meant doing the high parts – the high trumpet, the oboe, and the solo violin – on the bassoon… a couple of octaves lower. That sounds fairly gross, but it was pretty fun to do.

Then we got together the next week to do something else, but I showed up with a piece called “The Sanka Cantata.” It didn’t have a composer or anything, but we recorded it. Then we decided to make that tape in the form on a radio broadcast, but we needed a composer for the piece. We all knew about Bach’s famous sons like J. C. Bach and C. P. E. Bach. One of us suggested PDQ Bach.

PDQ was an expression in the 1920s when my mother was young meaning Pretty Damn Quick. It was used the way ASAP is used now. So, we made the tape just for friends, and it lay dormant for several years until 1959 when Jorge Mester, the conductor, and I and other friends put on a concert at Juilliard. We were students there. It was just a humorous concert, and it became an annual affair, but by the second year, I realized that these pieces I was coming up with needed to be by the same composer. So, PDQ Bach floated back to the surface of my mind.

So we did these concerts annually for about six years, and in 1965 a friend and I rented Town Hall in New York City. We got the money to hire the orchestra and put on the first public concert. My friend had taken the tapes that we had from Aspen and Juilliard around to various record labels, and Vanguard took the bait and recorded that first public concert.

Even then I thought that all this might last five years or so. I had no idea that it would end up a career. By the mid 70s it was pretty much paying my bills and then some. And the rest, as they say, has been travesty.

Now we just did the 42nd PDQ Bach concert in New York, and there are now something like 17 PDQ Bach albums. The latest album just came out. It’s called PDQ Bach/The Jekyll and Hyde Tour.

The career has been a hoot, and I’ve enjoyed it immensely.

Has anyone tried to imitate you?

Schickele: Yes, I hear about them from time to time, and some of them send me their pieces. There are places that do annual PDQ Bach concerts, sometimes with stuff mixed in that others have written. A lot of the PDQ Bach concert has a big visual aspect as well. So it’s all over the map. I remember one place where on the very last chord of “The Seasonings” hundreds of balloons were released in the auditorium. So, all sorts of good stuff happens. But I don’t have any protégées. I haven’t encouraged anyone to do this.

Someone suggested once that a couple of centuries from now, a musicologist will write a paper with the thesis that there was this twentieth century composer named PDQ Bach who had this alter ego by the name of Peter Schickele.

If I remember correctly, you started your musical training as a bassoonist.

Schickele: That’s right. I played bassoon during high school and college in the Fargo-Moorehead Symphony Orchestra and then in the orchestra at Swarthmore College. But when I got to Juilliard, there were real bassoonist around. They knew how to make reeds and everything. So, I gave it up. I had never even owned an instrument. I had never intended to be a bassoonist. I just wanted to play in an orchestra. At Juilliard I was a composition major.


How did you come to create “Oedipus Tex?”

Schickele: That one was commissioned by a chorus in Dallas for a big anniversary in Texas. Just that fact led me to thinking about Texas stories and the title “Oedipus Tex” set me off in a certain direction like PDQ Bach’s one act opera “Hansel and Gretel and Ted and Alice.” Once you get a title like that, you just run with it.

How about “The Seasonings"... was that a commission?”

Schickele: No, “The Seasonings” was an independent discovery. It’s older than “Oedipus Tex.” The first public concert of PDQ Bach material happened in 1965, but for the second concert the next year, we needed new material. For that concert, we got a chorus together and an orchestra. So, “The Seasonings” was done for a New York concert with Jorge Mester conducting.

So how do you get the creative juices flowing?

Schickele: It’s an automatic thing. I have music going in my head – original stuff and ideas – running through my head all the time. PDQ Bach and Peter Schickele, the two composers, I can work on them simultaneously. There’s no particular difference in the composition process, except that the PDQ Bach pieces are actually funny.

Schickele: It’s a great little opener. A long line of pieces that I’ve done that consists entirely of quotes. There’s not a single original theme in the piece. Composers usually don’t brag about that, but I do. It combines a lot of country and square dance tunes with classical tunes. The piece has shape so it’s pleasing.

Will you bring back the Schickele Mix?

Schickele: The syndicators took it off the air last July 1st. But the weird thing is that it had been running for the previous nine years as reruns. My producer and I actually ran out of money for the show in 1998. So, the last nine years have been reruns. There were about 175 shows in all.

I’m hoping in the future to make it available on CDs or streaming something or other. But I can’t do that for a few years after it stopped broadcasting, because the rights remain with PRI – Public Radio International - and then after that the rights revert to me. After I get control of them again, I’ll see if I can make that happen.

What is your role in the upcoming concert with the Portland Symphonic Choir?

Schickele: I always appear as Professor Schickele, talking about the pieces I’ve discovered and then they are performed. I heard that someone somewhere thought I was going to appear in Portland as PDQ Bach, but that’s against the law and can get you into trouble. I’ll introduce the pieces and the instruments. One of the instruments is the tromboon, which I discovered in junior high school, and I was fooling around in a typically chaotic class. I had taken up the bassoon and found that the bocal, the mouthpiece part of a bassoon, could fix into a trombone in place of a trombone mouthpiece. The tromboon produces a sick cow sound, but you can control it, and it has a certain weird range. It’s been one of my best standbys and most popular instruments.

Schickele: I’m looking forward to it!
Posted by James Bash at 10:37 PM

Thanks for a fun interview! The concert was hilarious and the music was silly and beautiful both. Afterwards, we stopped at the Heathman for coffee, and Peter Schickele came in and sat at the table across from ours. I had done some sketches during the show of various characters from Oedipus Tex and The Seasonings, so I approached his table and asked if he wouldn't mind signing my sketchbook. Mr. Shickele was wonderfully obliging and said he'd be very happy to do it. He even spent a few moments contemplating the best place to sign in order to fit the writing/drawing composition I'd arranged on my pages. He was just as friendly and funny as he sounded in your interview, which answered just the kinds of questions I've always wondered about. Thanks again!