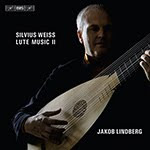 BIS Records recently released a CD by Swedish lutenist Jakob Lindberg playing music of the German composer Silvius Weiss. Weiss was an almost exact contemporary of J.S. Bach, whom he met and challenged to a counterpoint competition--Bach on the harpsichord, Weiss on the lute. That says quite a lot about Weiss' abilities on the lute, and Lindberg's rendering of this difficult music leaves nothing to be desired by way of technique or interpretation. The odd title of the release is in reference to that fact that this could be considered a companion CD to an earlier release by Lindberg of Weiss' lute music.

The Ouverture to the first work, Sonata No. 39 in C Major, gallops forward in a bold, declamatory style, briskly paced and featuring a succinct realization of the contrapuntal outworkings that is delightful to hear. Lindberg's ability to so cleanly voice the numerous entwined melodies is stunning, and gives one great appreciation for Weiss' virtuosity on the lute (and an understanding of why he may have had the cheek to challenge Bach.) The Sarabande is truly delectable, full of an unrequited longing that Lindberg savors, note by note.

The Tombeau sur la Morte de M. Comte de Logy takes the form of a peripatetic allemande that is all grief, a slow, singing journey through the sadness that Weiss felt at the death of this great lutenist. Lindberg reveals a keen understanding of the subtle colorations required to prevent this somber dirge from becoming agonizingly dull, which can happen to pieces of this kind in lesser hands. Instead he yields a work that is engaging and full of the sincere, grave pathos that came to flower in the high Baroque.

The entire disc is fantastic, a true revelation of Weiss' genius as a composer and Lindberg's singular skill as a lutenist. It is an absolute delight, a treat for the ear as well as the soul.
Posted by Lorin Wilkerson at 2:37 PM