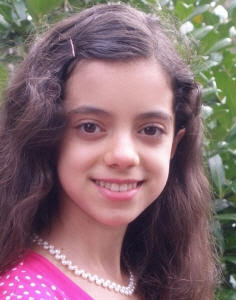 Denná Good-Mojab will appear in concert on April 10, 2010 at 7:00 pm at the HART Theatre in Hillsboro, Oregon. All profits from this fundraising event will be donated to support Mercy Corps' work in Haiti. Her goal is to raise at least $5,000 through ticket sales for her concert, additional donations at the concert, and donations via this fundraising page, The program will include classical songs, operatic arias, and other works in English, Italian, German, and Farsi. A representative from Mercy Corps will be at the concert to talk about the organization's work in Haiti and to accept additional donations. For more information or to purchase tickets, please contact HART Theatre at 503-693-7815 or visit their website at hart-theatre.org. Tickets for the concert are $35 each.

Denná Good-Mojab is currently a sophomore at Eastern Oregon University. In 2007, she debuted with the Portland Opera as the Second Spirit in Mozart's "The Magic Flute." She was ten years old. She sang again with the Opera in its 2009 production of "La Bohème." In June 2010, she will graduate from high school at the age of 13, having taken only 1.5 years to complete high school graduation requirements at Estacada AllPrep Early College through being a full-time college student. In the fall of 2010, she will attend Portland State University, double majoring in English and music--with an emphasis on voice. Ms. Good-Mojab said, “I am organizing and performing in this concert because I want to help the people of Haiti survive and recover from this disaster. Even though two months have passed since the earthquake struck, this crisis is far from over. I want to do my part to help by raising funds for Mercy Corps.”
Posted by James Bash at 11:16 AM