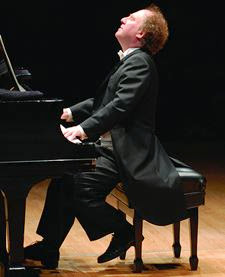 Musically speaking there was much magic in the air on Sunday night (November 2nd) at the Arlene Schnitzer Concert Hall. That’s because the Oregon Symphony, under the baton of Carlos Kalmar, gave an enchanting performances of Paul Dukas’s “The Sorcerer’s Apprentice” and Sergei Prokofiev’s “Cinderella Suite” as the first and last pieces on the program. For the filler in the middle, the orchestra teamed up with pianist Jeffrey Kahane for a sparkling rendition of George Gershwin’s “Concerto in F major.”

Kahane is a terrific artist who has performed in Portland a number of times. After the orchestra opened the Gershwin with a splashy, showy fanfare, the spotlight fell on Kahane, who deftly introduced the dreamy, bluesy melody that suggested someone cruising Broadway when it was still referred to as The Great White Way. That seemed to inspire the orchestra to stir up things with a flashy passage that then shifted back to the pianist and together they painted a jazzy scene that had real snap to it. The mood segued to a dark, smoky nightclub scene, with kudos to Jeffrey Work, principal trumpet in the second movement. The third, fronted by Kahane’s pulsating pianism, had an uptempo and uplifting feel.

I was most interested in hearing Prokofiev’s “Cinderella Suite,” a 45-minute selection of pieces from his full ballet score. A real help in this performance was the use of projected titles which provided the storyline for each segment of music. Under Kalmar’s baton the orchestra established the brooding atmosphere right away. The quarreling stepsisters came through grousing sounds from the violins and woodwinds with sharp jabs from the brass. The violins spun a sinewy web of sounds that created the atmosphere of the Fairy Godmother who changes a pumpkin into a carriage. The woodwinds were in top form, creating elegant sounds for the dances at the ball, and the orchestra created a suspense as Cinderella and the Prince dance together. Then came the big highlight with the woodblocks whirling and and the brass section making a heavy glissando of everything falling apart as the midnight bell sounded. It was a really terrific moment that I think could have been even more terrific if the woodblocks could have gotten louder and louder. I only mention this because I got to hear Valery Gergiev and the Kiev Orchestra do this piece in New York City several years ago. The overwhelming loudness was so incredible impressive that I’ve never forgotten it. Still, the Oregon Symphony’s interpretation was absolutely valid and the lovely threading of the sound from the cellos and the violins as Cinderella and the Prince find each other was magical.

The concert began with an impeccable performance of “The Sorcerer’s Apprentice.” An air of mystery and wonder was invoked at the beginning and enhanced by the strings finishing off the introductory phrase with a straight tone – absolutely no vibrato. Principal bassoonist Carin Miller Packwood and her colleagues played with panache. A brief and elegant solo by principal violist Joël Belgique and some wild curlicues on the piccolo by Zachariah Galatis added to the brew that the orchestra and Kalmar cooked up. It was spellbindingly fun to hear!
Posted by James Bash at 9:28 AM