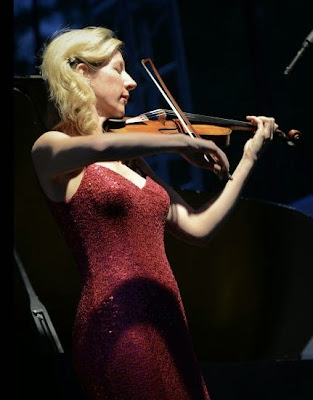 John Corigliano’s “The Red Violin: Chaconne for Violin and Orchestra” received a finely honed interpretation from Elizabeth Pitcairn, who performed it with the Portland Columbia Symphony in front of a fairly full house at First United Methodist Church on Friday evening (November 21). Pitcairn really owns this piece, in part, by virtue of the instrument she plays. It’s the Red Mendelssohn Stradivarius of 1720, which is said to have been the inspiration for the “The Red Violin” movie, which won an Academy Award for best original score (Corigliano’s, of course). The red Strad has been in Pitcairn’s possession since she was a teenager, when her grandfather purchased it for her, and, in her introductory remarks, she mentioned that she has given it the nick name of Felix, because it used to belong to the Mendelssohn family.

Pitcairn’s playing of Corigliano’s suite was impeccable, and some of the best moments came during the serene and wistful passages that were delicate and very high. She deftly expressed the agitated and loud sections, which featured fleet fingerwork. A couple of the rising passages might have had more impact if she could have put more of an edge at the end of the phrase, because her tone got lost in the swelling crescendo from the orchestra. But it may be that the acoustic at First United Methodist just swallows up that sound no matter how loud the soloist plays.

The orchestra, under its new Music Director Steven Byess, did an excellent job in creating tension and releasing it. The snaps from the percussion section and the snarls from the woodwinds and brass were very effective. Following the thunderous applause, Pitcairn mesmerized the audience with the “Allegro” from Fritz Kreisler’s “Praeludium and Allegro,” and elicited another standing ovation.

After intermission, the orchestra gave a spirited performance of Edward Elgar’s “Enigma Variations.” It was delightful to hear all of the twists and turns that Elgar gave to the main theme. The most famous variation, "Nimrod," featured a wonderful slow crescendo that blossomed and created a grand, noble statement that also has a hint of sadness. Intonation in the strings got a little blurred during fast passages in some of the variations. Solo contributions by the principal bassoonist, violist, and cellist in the final variations, plus the plaintive clarinet and the swelling organ in the final movement highlighted the performance.

The concert began with Stokowski’s orchestral arrangement of Bach’s “Toccata and Fugue in D minor.” It’s always fun to hear which instruments get to handle a particular passage, and it seemed to me that the pairing of the bassoon with the lower strings and a later section that featured a wicked bassoon riff were the best.
Posted by James Bash at 1:44 PM

thanx for this entertaining review.

i'm a big fan of corigliano's score for "the red violin" & plan to screen it someday during a future March Music Moderne festival.

say, is elizabeth related to the people that live on Pitcairn Island?

I couldn't say it better, it was a incredible and wonderful experience to hear the "Red Violin!"