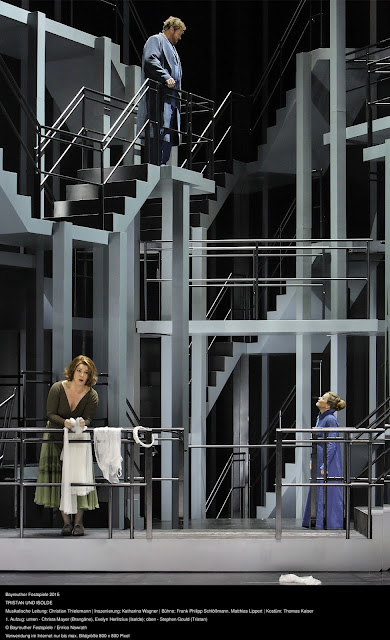 A lot of people attend “Tristan und Isolde” for the glory of its music, because it is often presented in a visually static and very boring way. Most of the time, the title characters go on and on about an ideal conception of love, and nothing else happens. So, it was wonderful surprise when, on August 18th, I heard the new production that Katherina Wagner created for the Bayreuth Festival. That “Tristan und Isolde” had a wonderful mix of visual elements that enhanced story and made it more engaging than ever.

The curtain rose to reveal a labyrinth of stairs and gangways that evoked passageways on a ship and also a prison. For a while, the lovers were separated by a gangway that could rise or fall and by shorter sections that could be disabled.

In Act II, Isolde and her servant Brangäne were locked in a prison with high walls. From above prowled King Mark, his right-hand-man Melot, and four retainers who used spotlights to watch the women. Later, Tristan and Kurwenal were also thrown in. Tristan and Isolde found a heavy cloth and hung it on a line to shield themselves from the spotlights. As their love intensified, the spotlights became weaker and the lovers stepped into the open where their silhouettes were cast onto the prison walls and gradually transformed into something like embryos of themselves. Later a section of metal ribbing became a special place where the two almost reached fulfillment as a couple. That was when King Marke, Melot, and the retainers broke onto the scene, and Tristan is mortally wounded.

The final act began with a very thick blanket of fog (but no fog machine with dry ice was used). Using a special lighting technique (kudos to Richard Traub), Isolde (actually eight different body-doubles) would appear – standing inside triangular frames – at various parts of the stage floor or seemingly suspended in the air. Each time, Tristan came near or touched one of these apparitions, Isolde would fall apart. Then, at the very end, after the real Isolde came onstage to sing her final words of everlasting love to the body of Tristan, King Marke hauled her off. With Tristan dead, she was finally his to claim.

All aspects of the singing were off the charts. The stamina, power, and beautiful tone of Stephen Gould’s Tristan was something to behold. But the same high qualities also applied to Evelyn Herlitzius’s Isolde. Both singers created a lasting impression of unquenchable passion.

Compelling also was the anguish in voices of Christa Mayer’s Brangäne as she tried everything to prevent Isolde from pursuing Tristan. Equally convincing was Iain Paterson as Tristan’s Kurwenal who struggled in vain to keep Tristan away from Isolde.

The anger and frustration of King Marke was clearly conveyed by George Zeppenfeld. In the role of Melot, Raimund Nolte’s voice had a mellowness that was unique but did not get in the way of his character’s tough and rash actions. Tansel Akzeybek’s plaintive voice as the young sailor and the shepherd was also outstanding. The chorus sang with intensity from offstage.

Under the baton of Bayreuth’s Music Director, Christian Thielemann, the ebb and flow of Wagner’s music sounded completely organic. The loudest passages swelled with enthusiasm yet never overwhelmed the voices. The softest passages created a sense of intimacy and tenderness. The hunting horns at the beginning of Act II sounded wonderfully far away in the hills.

Finally, it should be noted that this “Tristan und Isolde” was Katherina Wagner’s debut production at the Bayreuth Festival. She has been sharing the leadership of the festival for several years, and some critics have been openly fearful of what she would do with this opera. But it is an exceptional production, and it will be presented six times during the 2016 season. 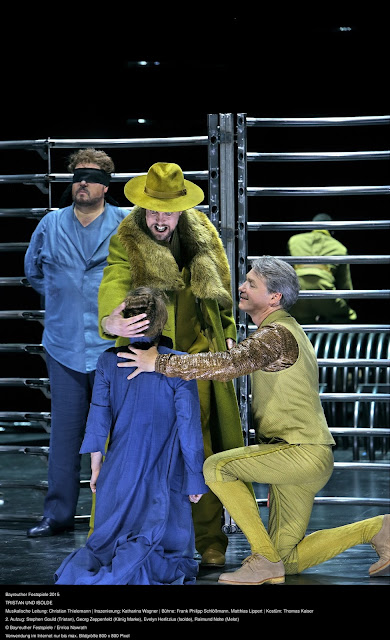