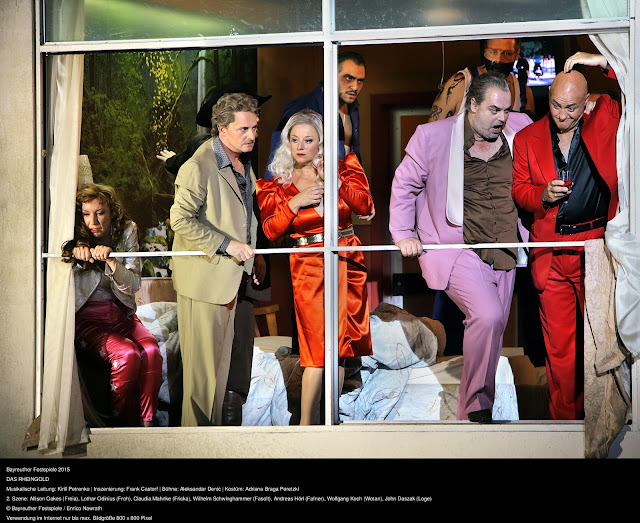 In the Frank Castorf production of “Das Rheingold” that I saw in Bayreuth on Friday (August 21), Wotan and company have their god-like powers, but they are just a bunch of gangster types in a low-life setting. On top of that, Castorf has added an up-close-and-personal element via cameramen who follow the gods around as if they were doing a self-promotion video or were part of a reality TV show. It all creates a lot of distraction, but some of is understandable, because Castorf has an extensive background in the theater world, not the opera world. 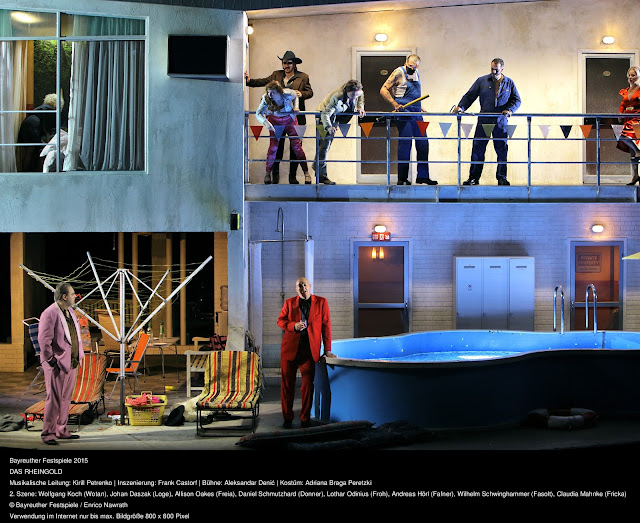 The first act opens at a rundown motel somewhere in Texas. The three Rhinemaidens (Mirella Hagen, Julia Rutigliano, and Anna Lapkovskaja) are pouty, sultry tramps who busy themselves with consuming fast food and checking their makeup instead of guarding the gold that is in the swimming pool nearby. They briefly tie up Alberich (Albert Dohmen) and slap him around a little bit, although he hardly seems to want to move from his lawn chair. Provoked by them, he tosses his rubber ducky aside and punches a couple of beach balls before wandering around, eating some sausage, and finally immersing himself in the swimming pool to grab the Rhinegold. 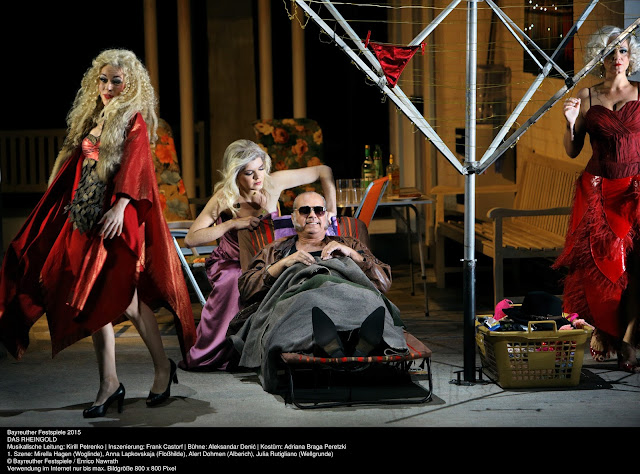 After realizing what they had lost, the Rhinemaidens frantically begin their search, and as the stage revolves, it reveals an old, worn-out gasoline station. In the meantime, a camera man emerges on the scene, and the audience can follow close-up action on a large screen. Wotan (Wolgang Koch), dressed like a gangster, is in bed in the motel, enjoying the affections of Fricka (Claudia Mahnke) and Freia (Allison Oakes) – both of whom wear flashy clothing. Via a phone call (landline), they learn that the giants, Fasolt (Wilhelm Schwinghammer) and Fafner (Andreas Hörl), are coming to be paid for their work on Valhalla. Freia especially plays to the camera and at one point holds up a bible to the lens – a funny incongruous gesture. Finally both women put a chair against the door in hopes that it will hold back the giants. Fasolt and Fafner arrive at the gas station, beat up the attendant, smash things, and end up in the motel room where they begin to wreak havoc.

Soon Loge (John Daszak), Froh (Lothar Odinius), and Donner (Daniel Schmutzhard) are in the room as well. Donner, who constantly threatens to shoot the giants with his pistol, looks like Sonny Bono in a western getup. Loge and Froh wear something akin to playboy-gangster garb. All – except the giants – pose at times for the cameraman. After Fasolt and Fafner haul off Freia, Wotan and Loge go to meet Albrecht.

The Nibelungheim is just an area in front of the gas station, where there’s an old airstream trailer, which Mime (Andreas Conrad) attempts to clean. Periodically a Nibelung piles some gold bars inside the trailer. Alberich steps inside the trailer and uses the Tarnhelm to change into a snake. The audience only sees the snake slithering over the gold bars on the screen. After Alberich changes into a toad (also shown only on the screen), he is caught by Wotan, and Loge scoops up the Tarnhelm.

Back at the motel/gasoline station, a Confederate flag is lowered from the flagpole and a Rainbow flag goes up. (This caused the audience to react with chuckles.) The giants return, but because they have thrown the mattresses out the window, Freia has to lie down on the bedframe (slats) while bars of gold are thrown on top of her. Fafner and Fasolt get into an argument and Fafner kills Fasolt with some combination punches. Wotan kisses Erda (Nadine Weissmann) aggressively, and Donner, on top of a part of the motel, hits something metal with his sledgehammer to signal the opening of the rainbow bridge to Valhalla. Except that there is no bridge. Instead, a group of Nibelungs do a zombie-trance-like dance in the gas station (with the camera up close on their faces), and afterwards the screen shows the Rhine maidens swimming.

Unfortunately, the constant action on the screen and the action in the foreground often distracted me from listening to the music. It seemed that the singing was very good, and that Weissmann and Dohmen made the most memorable impressions: Weissmann with Erda’s warnings, Dohman with Alberich’s curse. With Kirill Petrenko’s leadership on the podium, the orchestra sounded terrific. (He also received the loudest cheers at the curtain call.)

It is too bad that Castorf chose to go with this vision of crass and decadent gods. Their smallness and wanton appetites didn’t reflect in any way the grandeur of the music. If they could have started out grand and then diminished over time, then they would have had a direction that would have been interesting to the audience. Well, at least the music was marvelous. 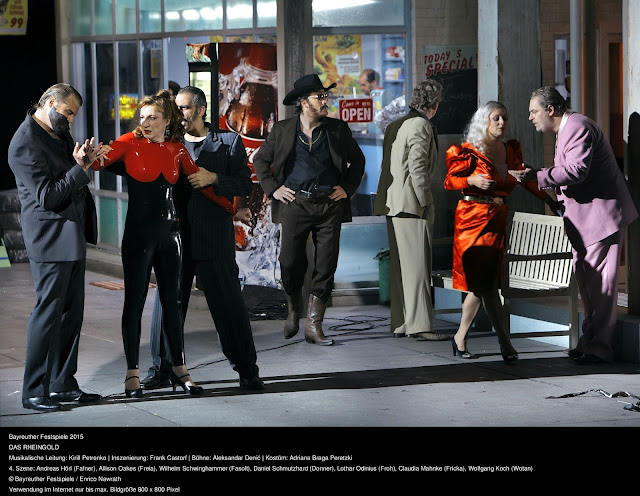