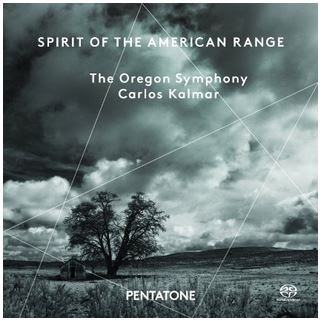 Months have passed since the Oregon Symphony released its most recent recording, "Spirit of the American Range," which features music by Walter Piston, George Antheil, and Aaron Copland. The album, released under the Pentatone label, has received praise from numerous reviewers, including Anthony Tommasini in the New York Times. So it may sound like boosterism when I add my opinion to the pile of accolades that the orchestra and it Music Director Carlos Kalmar have already earned, but dang it, "Spirit of the American Range" is an outstanding recording. Starting off with Piston's Suite from "The Incredible Flutist," you will immediately grasp the intensity of the performances, all of which were recorded live in the Arlene Schnitzer Concert Hall in April of 2013 and January of 2014. The musicians evoke the slowly emerging village scene (introduced by Martin Hébert’s languid oboe), the hodgepodge of busy vendors, the joyous outbreak when the circus arrives (with the musicians yelling and cheering), and the beguiling solo of flutist Jessica Sindell, which puts the townspeople in a dance-like trance that culminates in a furious finale.

The Piston is followed by Antheil’s “A Jazz Symphony,” which is a short and urgent that blasts a scattershot of jazz and ragtimey riffs across the landscape. It begins with a nod south of the border before it steams into wilder spaces. Loud and brassy sections feature the snarly trumpet of Jeffrey Work, and the energetic, beep-beepy horns, trombones and what have you that go lickety split in a chase scene. The music transitions through a ragtime piano passage before breaking into a frenetic mayhem and then somehow reforming itself into a grand, romantic, sweeping melody that could have graced the silver screen.

The grandest piece on the album is Copland’s Symphony No. 3. The orchestra doesn’t just play this monumental piece, it sings it with conviction. There are bombastic statements, serene passages, searching sections, lovely melodic phrases, and the “Fanfare for the Common Man,” which kind of sneaks up on you when you least expect it. Overall, the orchestra create a feeling of triumph and glow and the final explosive note is a ka-pow that slams it all together.

In addition to the musicians and Kalmar, kudos are in order for recording engineers John Newton and Blanton Alspaugh their work on this superb album. Maybe there will be more recordings by the Oregon Symphony of American free-range music in the near future. Let’s hope so.
Posted by James Bash at 9:22 PM

I've been listening to the Piston lately while driving - it can stand up to highway ambient sound! - and think it's really fine. I love the crazy piccolo outburst at the finale.

The Incredible Flutist was quite a departure for Walter Piston, who was known as a composer of absolute music, so it is ironic that the piece has become his most well known work. Its debut in 1938 by the Boston Pops was preceded by a memorable moment in the history of dance and classical music, setting the stage for the curious incident of the barking dog at Boston Symphony Hall:

...It began with an incident at Boston Symphony Hall in the spring of 1938, prior to the ballet's premiere. The company had been rehearsing Hans Wiener's choreography all winter, using only a piano transcription of Dr. Piston's music. THE DAY FINALLY CAME when the dancers were able to rehearse with the full orchestra. They became so delighted with the score for the "Entry of the Circus" scene that they began to yell and cheer. The orchestra joined in and at the end of the march contrabassoonist Boaz Pilar was barking like a dog. Arthur Fiedler, who was the conductor, rushed over to Piston. "What shall I do?" Fiedler asked. "I can't control them." Leave the barking dog and the cheering in," Piston answered. "Best thing in the score."

Numerous anecdotes relate to the barking dog bit, and they all emphasize Dr. Piston's remarkable sense of humor. ONE OF THE BEST is about Jesus Maria Sanroma, the Puerto Rican pianist who was a soloist for a Chicago Symphony concert at which Dr. Piston conducted "Flutist." Sanroma asked if he could do the dog bark and Piston consented. During the concert, when it came time for the cue, nothing happened. The orchestra members started looking around and the audience grew restless. Sanroma, it seems, was packing backstage and had forgotten all about his little part. Noticing the silence, he bolted from his dressing room and headed toward the stage, barking all the way. Says Dr. Piston: "It brought down the house."