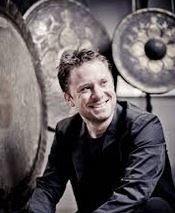 With virtuosic prowess and gusto, Colin Currie commanded a large variety of percussive instruments at the Oregon Symphony’s concert on Saturday (September 26). Whether it was tubular bells, gongs, marimba, congas, tam-tams, or tom-toms, the Scottish soloist displayed intensity and finesse in delivering an engaging performance of James MacMillan’s “Veni, Veni, Emmanuel.”

The piece draws from a French Advent plainchant dating back to the 15th-century in which the orchestra repeats four chords from its refrain. You could hear those chords especially in the brass sections. They settled nicely into the background – sort of a foggy blur against all of the things that Currie and other parts of the orchestra did in the foreground. And there was a lot going on – from the robust fanfare of the “Introit,” which were accented by some very loud smacks on the gongs – to the rolling waves of overtones from the tubular bells and the myriad of metal pieces that the orchestra members struck during the “Coda” at the end of the piece.

Some of the pummeling that Currie did on the various drums and blocks seemed aggressively loud, but it did convey a sense of urgency in the piece, which sought to present a world in agony and in need of redemption by the coming of Christ. That urgency was supported initially by slashing sounds from the orchestra, including eerie high notes from the strings. It all progressed or digressed into episodic blasts and sonic convulsions that seemed to cry out for a resolution. That resolution came when the orchestra members began to strike the little metal pieces that hung from their music stands and Currie calmly walked to the back of the orchestra and began to intone the incredibly tall tubular bells. The blend of overtones from the bells along with metal chimes was heavenly.

The orchestra also performed four tone poems from Bedřich Smetana’s “Má vlast” (“My Country”). The double harp introduction, exquisitely played by Jennifer Craig and Jenny Lindner, to “Vyšehrad” (“The High Castle”) was one of the highlights of the evening. Flutists Alicia DiDonato Paulsen and Sarah Tiedemann created marvelous swirling sounds during “The Moldau.” Memorable moments from “Šárka,”included the snoring tones from Adam Trussell’s bassoon, which were followed by a fast and furious finale that seemed to scorch the air. “From the Woods and Fields” contained a wonderful fugue that travelled through all of the string sections as well as a lovely French Horn and clarinet choir. Overall, the orchestra, guided deftly and very expressively by Carlos Kalmar, evoked a magical landscape of sounds that made the piece thoroughly enjoyable.

The opening piece on the program was a delightful number by Luigi Cherubini. Nothing much of Cherubini’s many works is performed today, but Beethoven regarded Cherubini as his greatest contemporary, and, indeed, Cherubini’s influence can be heard in Beethoven’s “Fidelio.” The Oregon Symphony played the Overture to Luigi Cherubini’s opera “Ali Baba, ou les quarante voleurs” (“Ali Baba, or the 40 Thieves”) with carefree élan. The strings put on a real show with snappy articulation during passages that blitzed by in a few seconds. The spry yet careful exchange of brief phrases between each section of the strings down to the cellos was immaculately executed. In the midst of it all, Niel DePonte tapped the triangle and his colleagues in the percussion section added a Turkish flavor to the music. In that small way, Cherubini number became an excellent lead-in to the MacMillan piece.
Posted by James Bash at 5:37 PM