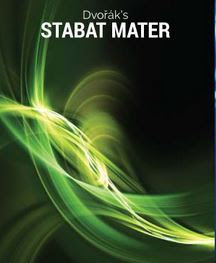 Dvořák’s “Stabat Mater” received a spirited performance from the Oregon Repertory Singers in collaboration with soloists and the Vancouver Symphony at the Newmark Theatre on Saturday (October 17). It was a rare performance of a cantata that apparently has not been heard in Portland for at least 40 years. Written in 1876, the “Stabat Mater” was Dvořák’s personal response to the deaths of his first three children. Based on Jacopone da Todi’s religious poem (written in the 13th century) that described Mary’s grief during the death of her son, Jesus, Dvořák divided the cantata into ten movements, and the performance that I heard, shaped with graceful gestures by ORS Music Director Ethan Sperry lasted almost 90 minutes.

The soloists were some of the best from the Portland-metro area. Most impressive was mezzo-soprano Hannah Penn, who sang ardently, with beautiful tone and power. Soprano Vakaré Petroliūnaité’s lovely voice soared and soothed but sometimes needed a tad more volume for the forte passages. Tenor Carl Halvorson’s tone seemed tight and his top notes were tenuous in the first and second movements. He looked more comfortable and sang directly to the audience from his solo in the sixth movement onwards. Bass André Flynn sang with gravitas and vigor but got a bit unsteady in some passages.

The 80-plus voices of the Oregon Repertory Singers made the most of the concert space, which is not the kindest venue for an unamplified concert. Using a mixed formation, the choir sang with intensity and sounded best during the unaccompanied section of the finale, “Quando corpus morietur” (“When my body shall die”).

The orchestra got into the spirit of the piece, but it needed more rehearsal time to nail down intonation problems and some muddled entrances. The violins did not always have a unified sound during some of their exposed passages, and the tonal disagreement marred their depiction of the heavenward ascent in the last movement.

It was also unusual to hear the audience applaud after each movement. For works such as the “Stabat Mater,” applause is usually held until the end of the piece, so that each movement can build emotionally on each other and the listeners can experience the arc of the music and the story conveyed. Projected text could have been a help in this regard, because, unless you know the Latin, it was difficult in the darkened hall to follow the words in the program.

Still, the performers did a fine job of working with the dry acoustic of the Newmark, which was built for performances of plays rather than music. Unfortunately, Portland doesn’t have many venues beyond the Schnitzer and the Keller for performances of large scale works like Dvořák’s “Stabat Mater.” And there are many, many cantatas that ensembles like the Oregon Repertory Singers can explore. They deserve a better performance hall. But until one is built, listeners will have to put up with the city’s deficiencies. That is Portland’s cross to bear.
Posted by James Bash at 11:36 PM