Cappella Romana's "Passion Week" a feast for the ears 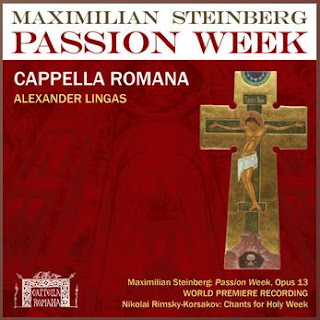 Several months ago Cappella Romana released the world premiere recording of a composer whose sacred work, entitled “Passion Week,” was banned during Stalin’s reign and received only a few partial performances. The composer, Maximilian Steinberg, is known today primarily as the prized pupil of Rimsky-Korsakov and rival of Igor Stravinsky. Steinberg was born in Lithuania to a Jewish family but, after studying music at the St. Petersburg Conservatory, converted to the Russian Orthodox Church and married Rimsky-Korsakov’s daughter just before Rimsky-Korsakov died in 1908. Steinberg taught music at the St. Petersburg (later Leningrad) Conservatory from that point onward (Shostakovich was his most famous student), eventually taking over Rimsky-Korsakov’s chair, and wrote a variety of compositions, including five symphonies, ballets, vocal pieces, and chamber music.

Steinberg completed “Passion Week” in 1923, which was the same year that Stalin declared performances of Orthodox sacred music verboten. Consequently, the score had fallen into the dustbin of history until just a couple of years ago when a copy was given to Alexander Lingas, an international expert on Orthodox music. Lingas is also the founder and artistic director of Cappella Romana, the Portland-based vocal ensemble dedicated to Orthodox music from the earliest Byzantine Chant to new works by contemporary composers. Under his direction, Cappella Romana recorded Steinberg’s “Passion Week” and added Rimsky-Korsakov’s “Chant Arrangements for Holy Week.” The CD has been cited as one of the best recordings of the year by “Gramophone” magazine.

Steinberg’s “Passion Week,” commemorates the betrayal and Passion of Jesus, basing ten of the eleven movements on Russian Orthodox chants for Holy Week. In the recording, the 26 voices of Cappella Romana make the opening “Alleluia” blossom with the basses on a D two octaves below middle C, the sopranos ascending to a high G, and the baritones, tenors, and altos filling out a massive chord between those two poles. The purity of tone, intriguingly thick harmonic textures, soaring tonal contrasts, and incisive dynamics are hallmarks of this performance. The third movement, “Your bridal chamber,” (in which Christ is likened to the bridegroom in the parable from Matthew) creates an ethereal atmosphere that glistens. In some of the movements, the singers are divided into 12 parts, and often they are graced by evocative solos.

Although Rimsky-Korsakov’s “Chant Arrangements for Holy Week” features less the deep bass sound that many listeners associate with Russian music, it delivers a satisfying sense of the eternal in the space of five movements.