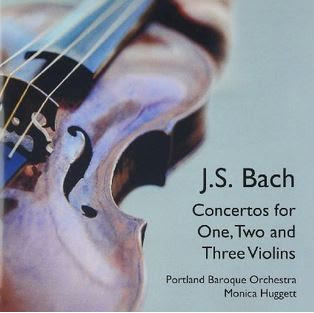 Even though it is the last day of the year, it’s not too late to take a look at the Portland Baroque Orchestra’s most recent recording, which is simply entitled “J. S. Bach Concertos for One, Two and Three Violins.” In this album, PBO artistic director Monica Huggett leads the period orchestra ensemble in sparkling interpretations of five concertos that Bach wrote during the time that he led the Collegium Musicum in Leipzig. You might be tempted to think that Huggett is the featured artist in the Concerto for Violin in A minor (BWV 1041) and the Concerto for Violin in E Major (BWV 1042), but she yields the spotlight to Carla Moore in the first and to Rob Diggins in the latter. For the Concerto for Two Violins in D minor (BWV 1043), the soloists are Jolianne Einem and Adam LaMotte. For the Concerto in D minor (BWV 1063), Huggett joins Moore and Einem in the merry making, and finally in the Concerto for Three Violins in D major (BWV 1064R), Huggett marvelously collaborates with Moore and Diggins. So the full set of five concertos provides 75 minutes of music, an excellent value for anyone weighing cost against the amount of time of actual sound.

The CD kicks off with the Concerto in D minor (BWV 1063) in an arrangement for three violins by Huw Daniel. Right off the top you’ve got Hugget, Moore, and Einem creating a fast spinning thread of interwoven sound that will make you want to get out of our armchair and dance. It’s an excellent opener that is followed by the Concerto for Violin in A minor (BWV 1041), played outstandingly by Moore. Next comes one of the most famous of Bach’s creations, the Concerto for Violin in E major (BWV 1042) with lovely solos by Diggins. In the Concerto for Two Violins in D minor (BWV (1043), another of Bach’s stellar pieces, Einem and LaMotte perform their solos with seamless perfection. The Concerto for Three Violins in D major (BWV 1064R) is a reconstruction of BWV 1064, which was scored for three harpsichords in C major. The intertwined sound of Huggett, Moore, and Diggens performing is pure joy to the ears.

Throughout all five concertos the PBO ensemble supports the soloists superbly with inspired dynamics, including crisp articulation in the faster movements and a delightfully languid sound in the slower ones. Overall, “J. S. Bach Concertos for One, Two and Three Violins” is a terrific introduction for anyone who is interested in Bach’s instrumental music as well as a stellar addition for those with a Bach library.
Posted by James Bash at 5:10 PM