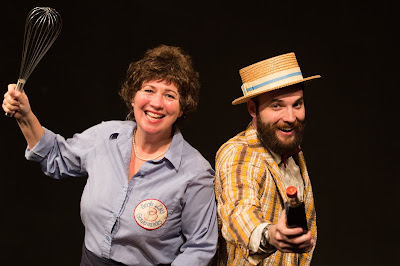 Back in 1856, composer Jacques Offenbach offered a competition to composers whose works had not been performed at the Paris Opera or Opera-Comique. They had to set a libretto based on a stereotypical comedy, and Bizet (at age 18) along with Charles Lecocq both won. Each had their respective works played eleven times at Offenbach’s theater in 1857.

The story concerns the town Mayor who doesn’t want his daughter, Laurette, to run off with a soldier, Captain Silvio. To that end, the Mayor hires a servant, Pasquin, who claims to hate soldiers, to fend off anyone remotely resembling Laurette’s suitor. Pasquin prepares an omelet that is so horrible that only the Mayor can force himself to eat it. While the Mayor and his wife, Veronique, go out for a walk, Pasquin reveals to Laurette that he is actually Captain Silvio in disguise. Before they can make their getaway to elope, the Mayor returns and banishes Silvio from the house. Suddenly, the Mayor’s wife is handed a telegram that the omelet was poisoned. Fortunately, Dr. Miracle is nearby and the family asks for him. He claims to have the cure but demands Laurette’s hand as payment. The Mayor and Laurette agree, and Silvio again reveals his identity. Veronique persuades her husband to accept the situation because he cannot prevent the inevitable. Everyone praises Dr. Miracle and true love.

The opera was sung in English and no supertitles were required because of the friendly confines of the studio space and the terrific diction of the singers. The libretto (translated by James Hampton with additional dialogue by Brenda Nuckton) offered some choice lines, such as when Mayor, who has be verbally pilloried by his wife and daughter, sings “Boy, I hate this song.” Later we find out that after the Mayor’s first wife died, he came into a ton of money; so he made sure that his second wife was much younger. Fostering the same scenario, the parents want their daughter to marry the elderly Mr. Bitcoin, because he would certainly die first and make Laurette a wealthy widow who can then do whatever she wants. In a wonderful bit of bombast, the telegram announcing that the Mayor had been poisoned proclaimed “Medical science can’t help you now!”

After intermission, the audience was treated to a second course, Hoiby’s “Bon Appétit,” which was adapted by Mark Shulgasser from transcripts of two episodes of Julia Child’s “The French Chef,” a popular TV show that ran from 1963 to 1973. In teaching the audience how to make a Le Gâteau au Chocolat L’Éminence Brune, a classic French chocolate cake, Meadows nailed the persona and gestures of Child so well that it was outrageously funny and sort of flabbergasting at one gulp. The way she would blithely toss a pan or another cooking implement to the side or fling flour all over the place caused buckets of laughter to erupt from the audience. At one point, after downing a glass of wine during a pause in the process, she would warn us that “You don’t want to go out and play croquet.” At another point, she can’t resist putting a chocolate-laden spatula into her mouth and giving us a tantalizing um!

Vocally, Meadows’s voice is still delicious to the ears, and she was supported with playful sensitivity by pianist Janet Coleman. Stage directions by Kristine McIntyre dished up platefuls of humor. It was a performance that Meadows should repeat at one of the hoity-toity restaurants in the Pearl. Seconds anyone?!
Posted by James Bash at 10:00 PM