Brass and organ ensemble recording chockful of world-premieres, including one from Portland newcomer William White 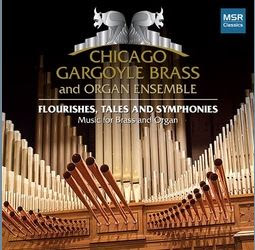 Just like chocolate and coffee, music for brass and organ is one of those confections that seems to be made for each other. So perhaps it is no wonder that a new recording of the Chicago Gargoyle Brass and Organ Ensemble sounds terrific. Entitled “Flourishes, Tales and Symphonies,” this album features a bunch of world-premiere recordings. That’s because The Chicago Gargoyle Brass and Organ Ensemble, which attributes its name to the stony figures on top of the gothic buildings at the University of Chicago, has commissioned a number of works and arrangements. Its CD, released under the MSR Classics label, contains pieces by Carlyle Sharpe, David Marlatt, Peter Meechan, Craig Garner, and William White, who is the interim music director of the Metropolitan Youth Symphony in Portland, Oregon.

“The Dwarf Planets” was written by White in 2012 while he was based in Cincinnati, Ohio, serving as the assistant conductor of the Cincinnati Symphony Orchestra. It has the feel of a tone poem, and, reminiscent of Gustav Holst’s “The Planets,” each of its five movements represents a god or goddess associated with a dwarf planet – which is a celestial body that revolves around the sun but lacks enough mass to be considered a planet. While the Hawaiian-inflected “Haumea” sounded rhythmically straight-forward, “Pluto” revealed a more sophisticated and nuanced style. “Ceres” contrasted a barnyard dance with a lullaby, and “Eris” created mildly dissonant atmospheres. The piece ended with a lightly bombastic “Makemake,” which depicted an unusual and exciting race from the Rapa Nul people of Easter Island.

Canadian composer David Marlatt’s “Earthscape” (2011) also had a celestial quality, depicting earth as a restful planet that rotates slowly in the emptiness of space. Marlatt’s piece had appealing melodic lines and plaintive cantabile passages for trumpet and horn

Carlyle Sharpe’s “Prelude, Elegy and Scherzo” (2012) started with stately pace and a broad, American almost Copland-esque sound. The meditative “Elegy” was expertly juxtaposed with the bubbly “Scherzo.” “Flourishes” (revised in 2010 in order to add timpani) brilliantly displayed many of the colors of the organ – played deftly by Jared Stellmacher – in a playful exchange with the brass.

The album contains three arrangements by Craig Garner. The first was the famous drinking song, “Liblamo ne’leti calici” from Verdi’s “La Traviata.” The trombone, trumpet, organ, and tuba took over the singers’ passages with gusto. The second was an arrangement of Jaromír Weinberger’s “Polka and Fugue,” which displayed beguiling interwoven lines. Garner’s arrangement of the “Adagio and Maestoso” movements from Camille Saint-Saëns’s Third Symphony (“Organ”) was straight-forward but a bit ponderous.

Peter Meechan’s “Velvet Blue” (2012) took the ensemble in an entirely different direction, laying down a hot, sweltering jazzy number – complete with snarling trumpet and swaggering trombone – before transitioning to a rock and roll like finale. That was refreshing! Who would’ve thought that a British-born Canadian would have uncorked such a wonderful twist?
Posted by James Bash at 8:25 AM