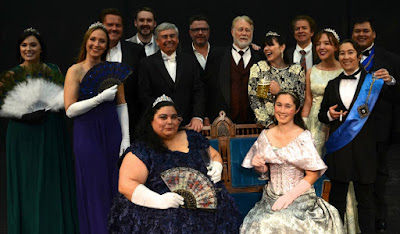 OperaBend has had a stellar run since they made their grand debut back in October of 2013 with their “La Premier Notte Grande” and the showcase of Seattle mezzo soprano Sarah Mattox. However, it was OperaBend’s production of “Les Miserables” at the Tower Theatre in 2014 that really put them on the map. The show wasn't just good for Central Oregon, it was one of the finest productions of any musical I have ever seen and set a new watermark for what small town theater is really capable of.

Thus my expectations were high for OperaBend's New Year's Eve production of Johann Strauss Jr.’s “Die Fledermaus” at the Pinckney Center for Performing Arts. Since the opera was to be performed in English with orchestra and some damned fine singers, and since I had never seen an opera in English, I was much more excited than a grown man should be about anything. Luckily, I was in safe hands.

After its premiere 1874 in Vienna, Austria, “Die Fledermaus” has been a fairly regular staple of opera houses. Besides offering a fun and breezy night of opera, it is also easily staged without much pageantry needed for the set or effects. Even the orchestra can be stripped down as long as the deck is stacked with powerful singers and actors, and fortunately OperaBend's bench goes very deep.

“Die Fledermaus” tells a few different stories and then throws them all together in the end to see what sticks. Let me see if I can break it down quickly: Rosalinda Eisenstein is married to Gabriel, who is set to go to prison for a short stint. Rosalinda still has feelings for her former lover, Alfred, and is excited to spend a few days with him while her husband is in the slammer. The Eisenstein's maid, Adele, has been invited to a bacchanalian ball being thrown by the rich, powerful and bored Prince Orlofsky, where Rosalinda and Gabriel are both making appearances in disguise, unbeknownst to anyone. What we have is partly a mistaken identity farce, partly a peek into the lives of the Viennese bourgeoisie, and partly a drama about being unfulfilled in life. Combined with Strauss’s music, the story makes for a fast moving and hilarious piece.

OperaBend's inspired production was directed by David Malis, who also sang the role of Dr. Falke, Gabriel's friend and instigator of the entire play. Malis has fully taken his cake and eaten it too, by not only by shaping an adaptation that even the most casual opera-goer can enjoy and follow, but also in the way that he filled out the cast with such powerhouses that even the most devout opera purist would enjoy

Kari Burgess as Rosalinda and Jocelyn Claire Thomas as Adele were staggeringly brilliant, with Burgess' incandescent soprano floating across the stage magnificently and Thomas' ethereal soprano causing a tear or two more than once or twice. While entire cast is magnificent, when these two were on stage there was truly magic in the air. I also have to mention Abigail Dock in the trouser role of Prince Orlofsky and Scott Carroll as Alfred. Dock was so subtle in playing the opposite sex that when her voice burst forth it was as refreshing and virtuosic as anything I've heard in a theater in quite some time. Carroll was having so damn much fun as Alfred that the house was giggling at almost every wink, nod or twitch of an eyebrow. His performance was reminiscent of Nathan Lane in his heyday.

It's downright depressing that this show only ran for two performances because it was something very special. All of those beautiful operatic voices and performances combined with Maestro Michael Gesme flawlessly conducting a delectable orchestra, an astounding mic drop of a marimba jam with two percussionists absolutely nailing “Flight of the Bumblebee” during Prince Orlofsky’s ball, and me in my seat, breathless.
-----
Jared Rasic is the arts and culture editor of "The Source," a weekly paper out of Bend, Oregon. He likes eating, sleeping, falling asleep while eating, opera, movies, music and puppies... not in that order. Puppies always come first.
Posted by James Bash at 2:08 PM