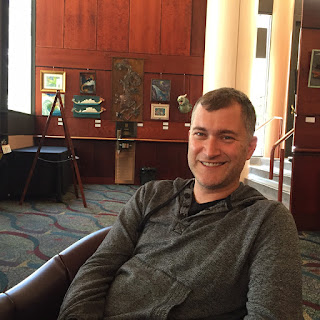 Fresh from his acclaimed directing of “Fellow Travelers” at Cincinnati Opera, Kevin Newbury arrived in Portland about a month ago for Portland Opera’s brand new production of “Eugene Onegin,”which opens tonight at the Newmark Theatre. I met him in the lobby of the Newmark to find out more. Here is part of our conversation.

How many operas have you directed for here?

Newbury: This is my fourth project with Portland Opera. I remounted Jim Robinson’s production of “Nixon in China” ten years ago. I did Philip Glass’s “Galileo Galilei” in 2006 and Argento’s “Postcard from Morocco” a couple of years ago.

You are setting this tragic love story in different period of time.

Newbury: It’s still a tragic love story, and in some ways a more tragic time period. We are setting it in the USSR during the 1980s and the last act takes place after the fall of the Berlin Wall; so it’s 1991. We see the changes that the country has gone through, and that raises the stakes.

What made you think of that time period?

Newbury: When I grew up, I loved Russian literature. I loved Pushkin and 80s pop music. I’ve always been obsessed with Russian and Soviet culture. Everything in the 80s on the news was about the Cold War, the space race, and the arms race. So once we cut the peasants chorus from the first act in this chamber version of the opera, you can set the story anywhere.

I love investigating canonical pieces in a new way – not just to bring in new audiences, but, frankly, to entertain myself and to put on a show that I would buy a ticket to see. It works quite well to have Onegin show up on a bicycle and give Tatiana a bootleg opera tape, and they listen to it on their Walkman together. No wonder she thinks that he’s falling in love with her.

Do you have a chorus in this production?

Newbury: Yes, we have a chorus of 14. All of the chorus music is intact except for that peasant chorus. That scene is the only anachronism of the opera. It’s a beautiful, fun group dance, but it doesn’t grow the story at all.

When Lensky and Onegin meet at the ball, how do you deal with that setting?

Newbury: The text says “What! I didn’t expect such music. What a fun party!” So instead of a boring waltz number we have Onegin putting a tape in the boom box and everyone dancing to 80s music – your still hearing Tchaikovsky of course – but I think that this makes perfect sense.

For me, it’s important that directors never cheat. I don’t change the text that you are reading. It’s just that we look at the story through a different context. The best example is Tatiana’s letter scene – this big 12-minute episode where she writes a letter to Onegin. She starts out writing a letter, but then she decides to record it on tape. She gives Onegin the tape. He listens to it, and he turns her down. It’s still a letter, but done 1980s style.

What a refreshing take!

Newbury: Thanks! It raises the stakes in the story. The Soviet Union in the 80s was a desperate time for most people. Money was scarce. People didn’t have access to culture and music. So when this debonair guy, Onegin, shows up with a cassette tape collection and a Michael Jackson poster for your birthday, he really rocks Tatiana’s world. I think that it makes more sense than seeing them very formally in a field of wheat.

When Lensky gives Olga a leather jacket in the first scene, her reaction is “You can’t afford this.” He had to sell his moped to get that jacket. So it really raises the stakes. The duel scene takes place in a parking lot with a car on stage and snow.

It sounds like excellent ideas for the young artists in the cast.

Newbury: It’s a really young cast. It’s great to have singers who are in their mid-twenties. That opens things up in a brand new way! A 25-year-old playing an 18-year-old seems much more believable than what you usually get in opera houses. And they are all such good actors!

Speaking of acting, how do you work with the singers? Do you have a preconceived idea of how things should go?

Newbury: I have a very strong philosophy that the best idea wins. It’s about establishing an atmosphere of collaboration where everyone feels free to share his or her ideas. My job is to guide the ship and to edit and recognize the best idea when I see it. Sometimes that’s my idea, sometimes it’s the singer’s or the designer’s. My favorite opening night is when I lose track of what came from where. That has been the case here for this production.

I like to set up a paradigm, a vocabulary, and rules of the world, and then let the singers find their way within that. Of course, I make lots of suggestions and edits, but I try to give the singers freedom to explore, too.

Is the set design a collaborative experience?

Newbury: Yes, we share images and ideas. I rely in my designers to bring it all to life, but we knew that we wanted to set this production in the playground of a Russian tenement, the duel would be a parking lot with a car, and the last scene would take place in an art gallery where the posters that you would see on billboards during the communist years are now being sold as art – like pieces of the Berlin Wall that were collected. The artwork of Soviet posters – as terrifying as it is – are beautifully done. So the remnants of people’s childhoods are for sale. But Tatiana is not.

So you searched through the internet and old magazines for images?

Newbury: We shared lots of visuals. The set designer, Dan Meeker, did computer renderings. Our costume designer Alison Heryer brought in photos from the 80s. Onegin has a haircut like John Cusack. Tatiana looks like Madonna in her early years. One of the chorus girls has Tina Turner hair. We’re aren’t literally copying those hair styles, but we were all doing that sort of thing in the 80s. I was born in ’77, and in ’85 I was dressing up like George Michael and Madonna actually.

Where did you grow up?

Newbury: Auburn, Maine – not far from Portland… Maine. I went to New York when I was 22 and have been there ever since. I was always interested in directing theater, and when I moved to New York, I got a job at New York City Opera in the artistic office. That’s when they were doing a hundred performance every year. I got into opera – fell in love with it, and began assisting. I was at the right place at the right time. I love all of it. I love music. I love directing rock and roll concerts. I did an opera with Courtney Love.

What was your big break?

Newbury: My big break was to assist Jim Robinson in his production of “Nixon in China” in St. Louis. He became so busy that he gave me “Nixon in China” to remount in many cities around the country, including Portland. All of those companies invited me back to do my own show. Now I’m very busy.

What’s next on your schedule?

Newbury: I’m making a short film in August. Then I’m doing a “Norma” with Sondra Radvanosky in Toronto.

I didn’t know that you did film.

Newbury: I always say that I direct film like an opera and opera like a film. They really inform each other in interesting ways.
Posted by James Bash at 1:17 PM