Talking with George Manahan about "The Italian Girl in Algiers" 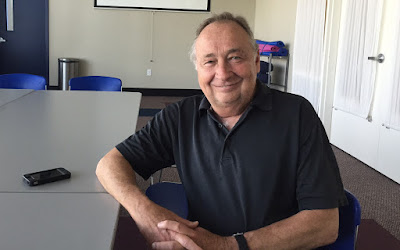 Portland Opera’s music director, George Manahan, has been enjoying his stay in The Rose City. He arrived in April to start working on the company’s production of “The Magic Flute,” which was followed by “Sweeney Todd.” Now, he’s back on the podium for “The Italian Girl in Algiers,” the wacky Rossini comedy that is currently running at the Newmark Theatre through August 6th.

I talked with Manahan at the opera company’s headquarters last Thursday, not long after he had finished a few games of tennis.

I didn’t know that you played tennis. What a terrific way to relieve stress!

Manahan: When I was younger, I was completely immersed in music. But as I got older, I realized that I needed something else. I played tennis as a kid with my family – with my brother and my parents as doubles. It was just recreation. My wife and I tried golf about 10 years ago, but I just don’t have enough weekends free for that lifestyle. I took up tennis again. You just have to move and all you need is a racket. It’s a lot of fun.

Because the orchestra pit in the Newmark is so small, are you using a reduced orchestration for this production?

Manahan: No, we are using the full orchestration, but we do have a reduced string section. Rossini’s orchestration is economical. We have one flute, one piccolo – there is one number, the quintet, that uses two piccolos – two oboes, two clarinets, one bassoon, two horns, and two trumpets, and percussion – no timpani. The Overture to the Barber of Saville has the same orchestration. There are recordings that use trombones and timpani, but they were a Nineteenth Century addition.

How many strings do you have?

Manahan: We have four first violins, four seconds, two violas, two cellos, and two basses. That’s all that will fit in the Newmark. This is my first production to conduct in the Newmark. There’s an intimate quality. The theater reminds me of Glimmerglass. Oh, there’s a harpsichord, too.

Will you be playing it?

Manahan: Yes. I play my own recitatives. It’s fun, and I’m so much more involved.

Do you get to improvise?

Manahan: Constantly. There are a few licks that I keep consistent, because it goes with the staging. But generally, I’m just phrasing. It’s like jazz, because I make it up as I go.

So Rossini didn’t write in everything for you.

Manahan: No, he just gave a figured bass. Here’s a little secret about this opera: Rossini didn’t write the recitatives. He contracted them out to another composer – we don’t know who. Rossini was under the gun to get the opera written as quickly as possible. He also contracted the Haly’s aria to a collaborator. That’s the one where he talks about Italian women. It’s in a spot after the big quintet – just like in “The Barber of Seville.” There’s a huge scene change, but in “The Barber” the maid comes out and sings in front of the curtain while they are changing the set. Haly’s aria does the same thing in this – same formula.

Rossini claims to have written the entire opera in 18 days.

He was noted as a fast worker!

Manahan: Of his three famous comic operas: “The Italian Girl in Algiers,” “The Barber of Seville,” and “La Cenerentola,” this one is my favorite. It is certainly the silliest.

How many times have you conducted “The Italian Girl in Algiers?”

Manahan: At New York City Opera, I did it in the late 90s and then at Glimmerglass – also at Wolf Trap in 1990. It was at Wolf Trap in 1990 when Chris Mattaliano was directing anther Rossini opera “Il viaggio a Reims”, but we’ve been friends since the early 80s.

Your background is in piano?

Manahan: My Bachelors of Music is in piano performance from the Manhattan School of Music.

It seems that with your abilities, you would have gotten involved in period orchestra performances.

Manahan: I’m aware of some gestures and techniques that belong to the historically informed style, but for me, the fun is to take a piece that was written in 1813 and make it urgent for today. It’s interesting to hear brass instruments with no valves but those specialists… I have a nickname for them: Earlier than Thou. They can always out-research you.

Are there any cuts in the Portland Opera production?

Manahan: Yes, there are a few in the recitatives, and the asides are traditionally cut because they are so redundant and don’t push the story along. The director and I decided to do some nipping and tucking – cut this or that line – to make things tighter. But if you make a cut in a recit, that can put things in a different key; so I have to modulate on the keyboard.

There are little inside jokes in this production – like the point where Mustafá is having a nightmare. He’s dreaming, and it’s in a recitative. I had put his aria in a minor key, but that was too subtle. So how I’m using something by Handel – the “Sarabande” – you might recall that it was used in the film “Barry Lyndon,” although I might slip something in from “Eugene Onegin.”

That is very talented!

Manahan: I’ve played enough jazz. I’ll certainly use little quotes from “The Italian Girl in Algiers” Overture. I’ll have to do them in different keys so that it works with the figured bass line.

What is different about conducting Rossini versus other operas?

Manahan: Everything has to be exactly together. With operas from the Romantic era, you can fudge things a little, because the orchestration can over thing up a bit, but with Rossini everything has to be spot on, especially the quick numbers like the quintet at the end of the first act.

So what are you doing after “The Italian Girl” run ends?

Manahan: I’m going to San Francisco. I’ll be directing the world premiere of Bright Sheng’s “Dream of the Red Chamber,” which opens at San Francisco Opera on September 10th.

Wow! That’ll be quite a switch from Rossini!

Manahan: Yes. I’ve directed a lot of new pieces over the years. So I’m looking forward to it.
Posted by James Bash at 8:46 PM