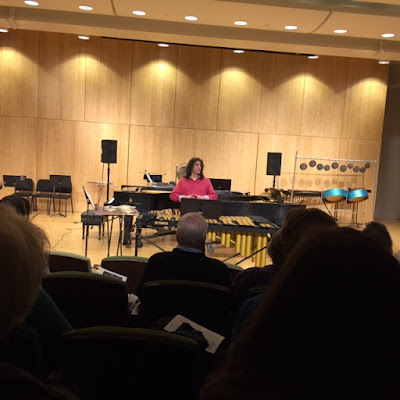 Percussionist Joel Bluestone’s final performance with the Fear No Music ensemble celebrated his connections with his colleagues with heartwarming élan on Friday night (Sept. 30) at Lincoln Hall. Bluestone, who cofounded FNM 25 years ago with pianist Jeffrey Payne, fashioned his own sendoff, selecting works by Joseph Walters, Osvaldo Golijov, Kenji Bunch, Somei Satoh, Tomas Svoboda, and Bonnie Miksch. In his introductory remarks to each piece, Bluestone gave his take on the music and reminisced about his fellow musicians. Along the way he managed to introduce Michael Roberts as his successor with the group and delighted the audience with impeccable playing on a wide range of percussive instruments.

Opening with Joseph Waters’s “Flame Head” (2001), Bluestone let loose on wangy-twangy opera gongs and vibraphone against a background wash of electronic music. Whenever the action paused, the space allowed a remarkable amount of hang-time for some of the sounds to reverberate. But most of the time, “Flame Head” had an engaging chaotic toy shop quality even though it was meant to be (as per the program notes) a “humble tribute to Chango, the Orisha of thunder and lightning in the Cuban-based Santera religion.”

Osvaldo Golijov’s “Mariel” (2008) for marimba and cello took the audience in the opposite direction with music that moved between a lamentation and a cry of grief. The soulful playing Bluestone with cellist Nancy Ives expressed anguish and acquired an emotional depth that struck a chord with the audience –which by the way had a lot of young students.

The first half of the program closed with “Road Trip” (1999), a light-hearted creation that recounted the cross-country excursion that composer Kenji Bunch took with his college roommate. In five-movements, it was easy to picture the car starting up, the climb through the Rockies, the break-down and wait-for-repair at forlorn truck stop, the resumption and surge across the Midwest, and the final celebratory arrival at the parent’s home on the East Coast. The performance by Bluestone, Ives, and pianists Monica Ouchi and Jeffrey Payne had a humorous edge that was accented especially by the wild-zing of the flexatone.

The second half began with “Toki No Mon” (“A Gate into Infinity), which Samei Satoh wrote in 1988. This piece featured a lovely pattern of notes that Bluestone played on nipple gongs from Thailand, and it was topped off by a chime-like chord from pianist Payne. Gentle sequences from the gongs and from steel drums were balanced against slow-moving phrases from violinist Paloma Griffin Hébert, and the combination created a contemplative, timeless atmosphere.

Bluestone teamed up with his replacement, Michael Roberts, to perform Tomas Svoboda’s “Duo for Xylophone and Marimba.” Their harmonic interplay tickled the ears and each performer got the opportunity to take the lead while the other accompanied. The last movement , “Allegro Moderato,” had a cantabile spirit that elevated the simple melody at its center.

The last piece on the program was the final movement, “In a field of golden light” from Bonnie Miksch’s “Somewhere I have never traveled.” For this piece, Bluestone played tuned copper pipes with the rest of the FNM ensemble (violinists Inés Voglar Belgique and Hébert, violist Joël Belgique, cellist Ives, and pianist Payne). They created a glowing, lyric sound that was heavenly, and Bluestone took the opportunity to distribute red roses to his colleagues during several measures when he wasn’t required to play. It was, I have to admit, one of the sweets gestures I have ever seen at a concert, and it added an extra dollop of poignancy to the occasion. Needless to say, the audience showered Bluestone with a thunderous, extended standing ovation.
Posted by James Bash at 6:02 PM