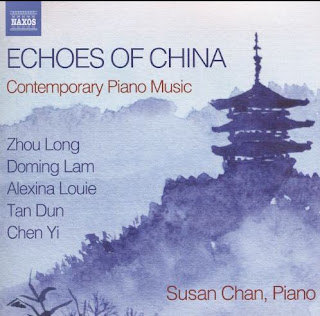 With the release of her latest album, “Echoes of China,” Susan Chan is solidifying her reputation as the go-to pianist when it comes to the best of East/West music. Released on the Naxos label, “Echoes of China,” features an intriguing mix of works for solo piano by composers Zhou Long, Doming Lam, Alexina Louie, Tan Dun, and Chen Yi – all of whom shape their music a Western aesthetic. Each piece shines brightly through the playing of Chan, who is a native of Hong Kong and a professor of music at Portland State University, and the CD, which contains three world premieres, leaves listeners with a vivid impression of contemporary China-infused music.

The recording opens with “Pianobells” by Zhou Long, who won the 2011 Pulitzer Prize for his opera “Madame White Snake.” Commissioned by Chan in 2012, “Pianobells” draws on an ancient legend of strong winds that can howl through limestone caverns and cause nine great bells to ring. By striking and strumming the strings inside the piano, Chan marvelously creates sonic rumbles that are punctuated by deep thumps. They are followed by scatterings of high treble notes, suggesting an ethereal presence. The piece closes with shimmering bell tones and gusts that fade into the distance.

The oldest piece on the recording is the “Lamentations of Lady Chiu-Jun” that Doming Lam wrote in 1964. According to the liner notes, the piece is based on a beloved ancient Chinese melody that tells of a young Chinese woman who was sent as a marriage gift to a Mongolian king in exchange for peace between Mongolia and China. The music delightfully evokes traditional Chinese opera instruments with lots of flourishes. The oddly clashing chords at the end may signal submission or some kind of inner defiance or both.

Alexina Louie, a Canadian composer of Chinese descent, is represented on the album with her “Music for Piano” (1982). It consists of four impressionistic movements that have a wonderfully flowing arc, starting with the questioning and probing spirit of “The Enchanted Bells” and concluding with “Once Upon a Time,” which puts a wrap on everything with a grand finale.

The longest piece on the CD is Tan Dun’s “Eight Memories in Watercolour” (1979), which explores the composer’s “diary of longing” through folk-songs from his childhood. Several of Dun’s “memories,” such as “Missing Moon” and “Blue Nun” evoke a soulful and wistful atmosphere. Others, such as “Staccato Beans” and “Sunrain” leave a playful and jokey impression.

Another world premiere recording on the album is that of Long’s “Mongolian Folk-Tune Variations” (1980). It presents eight variations on an opening melodic statement. Each variation is pleasant and lovely, but they had more of a “Western” feel than the other pieces.

Chen Yi’s “Northern Scenes” contains a flurry of passages that change quickly between demonstrative outbursts and lighter impressionistic images. In this world premiere recording, Chan creates a landscape that changes from warm and intimate to cold and distant yet always vivid.

“Echoes of China” is the third recording that Chan has made. If I am not mistaken, she has the most solo albums of any classical pianist who is based in Portland. I am sure that there’s a lot more East-West piano music that needs to be recorded. So it looks like she will be busy for a long, long time.
Posted by James Bash at 9:26 PM

Thanks for reviewing an intriguing compact disc, James.