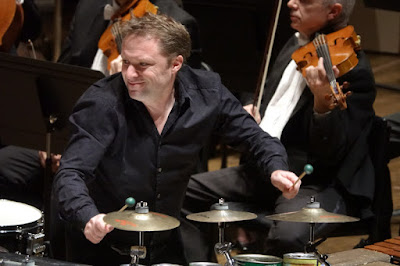 Whenever you see a hedge row of percussion instruments lined up along the front of the stage at the Arlene Schnitzer Concert Hall, you know that Colin Currie is in town. Sure enough, the intrepid, world-class drummer sprang in from off-stage to a lively and witty performance of Andrew Norman’s “Switch” with the Oregon Symphony on Monday evening (October 24nd).

In “Switch,” written in 2015, Currie had to dance between stations of his percussion battery. At one moment, he commanded a marimba, wood blocks, bells, and tin cans. Then he would jump to an impressive ensemble of tom toms, snare drum, bass drum, and cymbals, and then quickly move to another group that consisted of gongs, xylophone, wood blocks and a drum. According to the program notes, the dynamics that Currie, and even the other musicians, played were determined at times by snapping slapsticks from members of the orchestra’s percussion section. The snapping sound was the “switch” that signaled what to do. Often he had to react quickly and that meant figuring out where he was in the score that placed on three music stands in three different places. Yikes!

Despite ricocheting around, Currie seemed to be enjoying himself while using his virtuosic talent to create all sorts of fascinating sounds, many of which were mezzo-piano or softer. The orchestra had a major role, because it also expressed an eclectic assortment of passages that often careened from short blasts to uninhibited wagga waggas to mini-glissandos. Just when you thought you knew what was going on, something unexpected would happen – sort of like a conversation run amok but in a good way.

The second half of the concert was devoted to Richard Strauss’s “Ein Heldenleben” (“A Hero’s Life”), which the orchestra played with gusto and wry insight. Highlights included the grand opening statement, the chattering and bickering woodwinds, pulsating brass, and glistening strings. The nine French horns, led by John Cox, sounded terrific as did the offstage trumpets. At one point, the flutes impressively sneaked into the picture from out of nowhere, and Kyle Mustain’s expressive playing of the English horn was exceptional. But the best solos were delivered by Concertmaster Sarah Kwak, who elicited the wonderful warmth and playfulness – especially the little zings at ends of some phrases – of the hero’s wife.

The concert began with Christopher Rouses’s “Supplica,” (composed in 2013), which left an indelible impression because of its lovely subtleties, depth, and sublime emotional content. It was a slow moving piece that seemed to expand and contract in a way that was similar to breathing. There was a sense of tragedy that got resolved and moved into a space resembling prayer. It was a very remarkable performance. Music Director Carlos Kalmar and the orchestra seemed to find a personal space that reached out to each individual in the audience. At the start of the concert, President Scott Showalter remarked that the concert was being recorded for a future CD release. I really hope that “Supplica” is on that recording.
Posted by James Bash at 10:45 AM