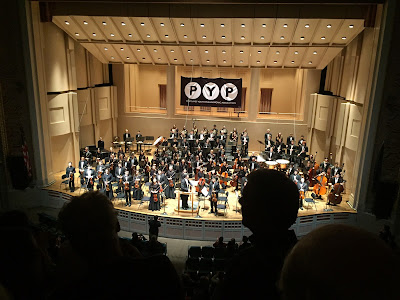 The scene outside the Arlene Schnitzer Concert Hall on Saturday evening (November 12th) was the one of the most unusual ones that I have ever witnessed. A police vehicle filled with anti-riot police was positioned right by the front doors of the hall and loudspeakers told anti-Trump protesters to move away from the Park Blocks or they would be arrested. The air was tense, but as I entered the lobby of the concert hall, the atmosphere relaxed and brightened considerably because it was the opening night of the Portland Youth Philharmonic’s 93rd season. On the stage were 108 young and very talented instrumentalists who were busily reviewing a myriad of passages from the music that they were about to perform. I was impressed by the focus of the musicians, who were gearing up with intensity for a program of music by Wagner, Bruch, and De Sarasate, plus a world premiere of Tomáš Svoboda’s Symphony No. 2 (Op. 41).

In his remarks to the audience, Music Director, David Hattner, told how a Camerata PYP successful premiere of Svoboda’s “Folk Concertino for Seven Instruments” led to the opportunity to play his Second Symphony. Svoboda, a prolific Czech-American composer whose work has received a Grammy nomination, wrote the symphony in 1963, but it had never been played because he fled his native country in 1964 to come to the United States, and that caused the premiere to be cancelled.

Consisting of four movements, the Svoboda’s Second Symphony opened with some massive sonic textures that involved the entire orchestra. Periodic whams from the bass drum added to the din, which then vanished, leaving a menacing fog of sound that was punctuated by the snare drum. Delightful conversations among the woodwinds with wandering flute lines alternated with another series of loud, expansive, and tragic-sounding passages that involved the entire orchestra. The initial measures of the second movement were somber and quiet, allowing for beautiful sonorities between Concertmaster Fumika Mizuno and Assistant Concertmaster Daniel Tang. The romantic theme transferred to the flutes and oboes before being handed off to the viola (Co-Principal Samuel Zacharia). Ominous, throbbing sounds from the orchestra threatened the lovely melody that had been established, but the romantic sensibility returned and after a plaintive clarinet solo (Principal Alex Lee) closed the movement in a gentle, restful state. The third movement began with a propulsive drive that crecendoed and decrescendoed against a highly-wire line of violins. Mutterings from the brass developed into larger blasts that were followed by an extended pizzicato line from the bass violins, and the movement ended with a line that was slowly built into a huge crescendo. The fourth movement featured a lovely bassoon solo, lots of intricate phrases for the woodwinds, a gorgeous melody for the strings, a fanfare for the brass, explosive sounds from the timpani, and a brief excursion for the piano before fading quietly away.

The audience responded with enthusiastic applause, not only for the outstanding performance by the orchestra, but also for Svoboda, who was sitting in the lower balcony with his wife, Jana Demartini. As Hattner suggested in his introduction, the music did seem to fluctuate between an expression of love and the fear of militarism and oppressive authority – with love surviving it all in the end.

Violist Samuel Zacharia, winner of PYP’s soloist competition, gave an outstanding performance of Max Bruch’s “Romanze.” He brought nuance to the piece, playing with a sweet tone and shaping each passage with impeccable taste. The orchestra accompanied him with terrific sensibility.

After intermission, the orchestra blew the listeners away with Pablo De Sarasate’s “Zigeunerweisen,” which usually features a violin soloist. But for this concert, Hattner divided up the soloist’s part so that 19 of his budding violin virtuosos had a crack at a devilish passage. Besides the fleet filigree, the musicians deftly negotiated combinations of double stops, pizzicatos with both hands, and glissandos. The exchange of the soloist’s line was handed off seamlessly with each violinist standing up quietly to play. Their performance was a flat-out foot-stomping crowd pleaser, and I think that the audience would have enjoyed hearing it a second time.

The concert opened with a robust performance of the Prelude to Richard Wagner’s “Die Meistersinger von Nürnberg.” The ensemble played it with gusto, but the only problem was a balance issue caused by the fact that there were so many strings. But wow, the strings sounded terrific!

Kudos again to the PYP, and the ability of young musicians to make great music. Perhaps a recording of Svoboda's symphony by them will be available in the near future.
Posted by James Bash at 7:45 AM