One-woman show advocates for Nannerl - "The Other Mozart" 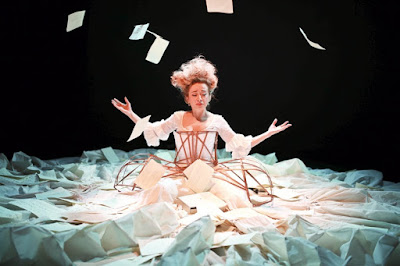 Occasionally, at a concert featuring W. A. Mozart’s music, I’ll read program notes about him having performed with his sister, Maria Anna Mozart, who is usually referred to by her nickname Nannerl. An additional statement might point out that she was an accomplished pianist, but nothing more. Well, I found out a lot more about this remarkable woman after experiencing Sylvia Milo’s dramatic monologue on Monday night, July 11, at Lincoln Performance Hall. Entitled “The Other Mozart,” Milo’s monodrama was a lively, well-paced account of Nannerl Mozart’s life and how frustrating it was for her in an era when women were expected to get married and have children but not have a career in the arts even when they had experienced a lot of initial success.

Drawing on newspaper accounts, letters, and other biographical material, Milo channeled into Nannerl’s personality. Her animated behavior showed a vivacious and artistically gifted person who became an accomplished at the keyboard and might have done equally well with the violin had her father allowed it. Yet after Wolfgang Amadeus was born and quickly displayed incredible musical talent, her father’s attention was almost entirely diverted to him. For a while the two siblings travelled from city to city giving concerts, and they enjoyed doing so immensely. Nannerl was even given top billing at performances and received glowing reviews, but as her brother’s reputation grew, she was gradually ignored and then asked by her parents to stay at home and learn domestic responsibilities. She reluctantly accepted her fate even to the point of marrying a much older and wealthier man, raising his children in a provincial town, and having her own set of children. Yet in the end, she was absolutely frustrated at not having developed her artistic pursuits.

Milo told Nannerl’s story mostly while stationed atop a huge, white dress that covered much of the stage. Now and then, she would pull out a sheet of music, a mirror, a toy piano, a book, embroidery, a music box, letters, and other props from the ruffles of the dress. By modulating her voice and accent, she portrayed members of her family and Wolfgang’s wife Constanze. Sometimes it was difficult to understand exactly what Milo said, but the majority of her monologue came through clearly.

Even though Milo’s theater piece was not meant to be a documentary, it would have been nice to have had a fact sheet with names and dates – just to give a little more context. Looking back on a time and culture that seems so far removed from today, one could easily see that Nannerl’s life would have taken a different trajectory had she been born today. Kudos are in order for Chamber Music Northwest, which presented Milo’s monodrama. Hopefully, it will return again to Portland someday in the near future.
Posted by James Bash at 3:56 PM