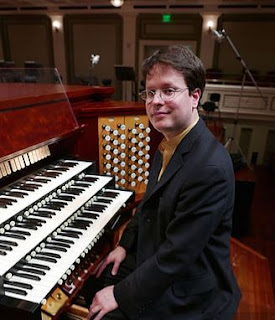 This week, Paul Jacobs returns to the Oregon Bach Festival where he will direct its Organ Institute and perform an all-Bach recital. That’s a big deal, because Jacobs is considered America’s leading organist. He is the only organist to have won a Grammy Award (2001 for Olivier Messiaen’s “Livre du Saint-Sacrement”), appears with orchestras all over the nation, premieres works by contemporary composers on a regular basis, and teaches at Juilliard where became the chairman of the organ department in 2004 at the ripe old age of 23. That was at that same time that he played from memory Bach’s complete organ works in an 18-hour marathon performance. Such an undertaking would probably cause other organists to lose their minds, but Jacobs is going on as strongly as ever before, and you can hear him play an all-Bach program ex memoria at 7pm on Thursday, July 6th at Central Lutheran Church in Eugene. The program consists of the Toccata and Fugue in D Minor (BWV 565), the Trio Sonata in E-flat Major (BWV 525), the Prelude and Fugue in D Minor (“Fiddle”) (BWV 539), the Trio Sonata in C Major (BWV 529), and the Prelude and Fugue in E-flat Major (“St. Anne”) (BWV 552).

I talked with Jacobs about his work at the Oregon Bach Festival and his upcoming performance. Here is part of our conversation:

How many years have you been associated with the Oregon Bach Festival and can you tell us something about the Organ Institute?

Jacobs: This is my fifth year to participate in the festival and my fourth year directing the Organ Institute.

We cap the participants at eight but we accommodate a dozen or so auditors. It’s a very enthusiastic and knowledgeable group. The challenge has been to accept everybody who would like to join us for the Institute. The quality of applicants is so high that it is difficult to make a decision of whether or not he or she can join us.

The festival has had a strong educational component. The organ has only become more visible as part of the festival’s offerings over the past several years. That might be surprising considering that the organ was central to Bach’s creative output and life. So we are all very happy that there is more organ music at the festival now.

For those of us who don't play the organ, what are the special challenges of playing such an instrument?

Jacobs: Organists have a number of mechanical considerations that other musicians don’t deal with. An organist must spend countless hours on an instrument when preparing for a concert. Each organ differs dramatically oftentimes from one to the next. You have to spend time with each instrument to figure out what sounds it can produce. But it is all worth the effort!

Tell us about the performance you will give. How did you select the program?

Jacobs: Organists have a vast arsenal of programs that we can play, and I’ve exposed some of that at the festival over the past years. This year, I am returning to an all-Bach program for the concert that I will give at Central Lutheran on its Brombaugh organ, which is an exquisite instrument.

Bach’s overall output for the organ is enormous. He composed pieces of all sizes and lengths, scale, color, mood, emotion... Everything that the human being can experience emotionally and spiritually is captured within these structures of sound.

The Toccata and Fugue in D Minor, BWV 565, is perhaps the most famous organ work of all time. But surprisingly it has not been played at the Oregon Bach Festival in quite a few years. So it will make an excellent opening for this concert.

The Toccata and Fugue along with the two Prelude and Fugues will be the weightier parts of the program. They will contrast nicely with the light and sparkly two Trio Sonatas. The Trio Sonatas are weightless pieces – absolutely dazzling, light-hearted and joyful. They are also quite challenging for the organist. They have three independent lines of music. The right hand is on one keyboard while the left plays a different melody on another keyboard, and the feet play an independent line. The texture is light and clear and beautiful, but it is very easy to take a wrong turn in such pieces, especially when playing from memory.

The Prelude and Fugue in D Minor, also known as the “Fiddle, is a curious work. Violinists would recognize it because the fugue was originally written for solo violin from Bach’s Violin Sonata in G Minor. Bach then arranged the work for organ, filling out counterpoint and thickening the texture.

The concert will conclude with the massive Prelude and Fugue in E-flat Major, “St. Anne”, BWV 552. The subject bears a resemblance to the familiar hymn tune “O God Our Help in Ages Past,” which is known as St. Anne. It is a spectacular triple fugue in three sections – three themes. It was orchestrated by Arnold Schoenberg. His flamboyant orchestration is worth a listen.

It’s great to watch the footwork when you do these works!

Jacobs: You’ll be able to see my feet. In Central Lutheran Church, the organ is up in the gallery. So the festival provides a video camera that projects the performance to the audience in the nave.

The visual aspect of live performance is very important. No other musician would be expected to play hidden from the audience. In the past, organists have been hidden, but thanks to modern technology the audience can see what the organist is doing.

What will you be doing after the Oregon Bach Festival?

Jacobs: I will travel to Shanghai in September for the first international organ festival and competition in China. I am looking forward to that. I love playing the organ. I can’t imagine a day without music or doing anything else with my life.
Posted by James Bash at 2:58 PM