Marvelous ”Two Yosemites” makes a passionate plea for the environment

“Two Yosemites” proved to be a surprisingly fine opera that resonated with a large audience at the outdoor amphitheater of the Lewis and Clark Law School on Friday, September 15th. Written by Justin Ralls and presented by Opera Theater Oregon, “Two Yosemites” marvelously conveyed the story of a transformative camping trip in 1903 involving John Muir and Theodore Roosevelt that led to the creation of one of America’s most iconic national parks. Outstanding performances by Nicholas Meyer as Muir and Aaron Short as Roosevelt, combined deftly with a taut chamber ensemble, conducted by Ralls, to create 60 minute, one-act opera that was emotionally satisfying and not preachy. 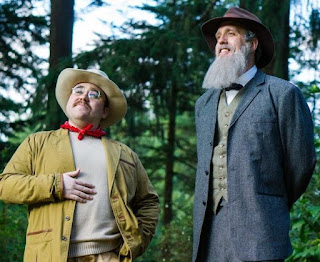 Ralls, a young composer who is pursuing a doctorate in music at the University of Oregon, really outdid himself with “Two Yosemities,” his first foray into the world of opera. The music was mostly harmonic accompanied by a deft ability for word painting. He evocatively used the piccolo to depict the song of a thrush and used a colorful pallet to paint an array of outdoor scenes on an intimate or grand scale. When Muir waxed eloquently about the beauty of nature, the music became rhapsodic but never syrupy. When Roosevelt described his love of hunting and his disdain for political wrangling, his line became punchy and aggressive. Yet, neither man was a one-dimensional cartoon. Ralls gave each man emotions and a complexity that, we, in the audience, could identify with.

Short did a masterful job of communicating the vibrancy of Roosevelt. Strutting about the campfire with a cocksure attitude of a man of action, he mesmerized the audience with an expressive tenor could be edgy when needed and then quickly transition to a legato of Mozartian elegance.

Nicholas Meyer superbly captured Muir’s dignity and vision for the great outdoors with a calm demeanor that was an excellent counterweight to Roosevelt. Meyer’s beautiful mellow baritone was at its best in the upper range, but it needed a bit more bite when Muir confronted Roosevelt.

The chorus of four women (Joannah Ball, jena Viemeister, Jocelyn Claire-Thomas, and Catherine Olson) sounded terrific except that their text (from an American-Indian language) needed supertitles. All of the singers and the orchestra were amplified because of the bucolic outdoor setting, and for the most part, that worked very well. To top off the evening, the voices of tree frogs seemed to add to the applause after the opera concluded.

“Two Yosemites” is an opera that deserves to be heard again and again. Perhaps the Astoria Music Festival might product it. Hats off to Ralls for writing such a marvelous opera on his first try. I hope that he writes another one in the near future.
Posted by James Bash at 2:00 AM