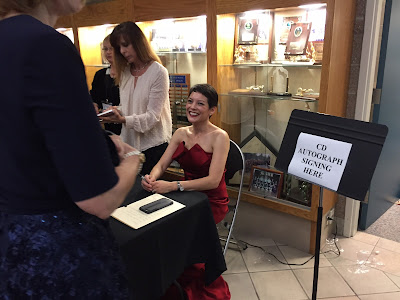 Anne Akiko Meyers delivered an exceptional performance of works by Maurice Ravel and Camille Saint-Saëns at the Vancouver Symphony’s season opener. Her outstanding playing set the near-capacity audience at SkyView Concert Hall abuzz on Saturday afternoon (September 30), and there was quite a long line of patrons at intermission to get her autograph in the lobby where she amiably signed CDs and programs and took time to pose with her fans. They know that her performances of Ravel’s “Tzigane” and Saint-Saëns’ “Introduction and Rondo Capriccioso” would be something to remember for a long, long time.

One of the best things about VSO concerts are the big screens that provide a close-up view of the featured soloist. For both the Ravel and the Saint-Saëns, they gave concertgoers a fascinating look at Akiko Meyers fingers, which raced up and down her violin like a gazelle. She demonstrated an astonishing ability to pin-point just the right note no matter how fast the music went by.

But it wasn’t just the Olympian speed and technical challenges – double stops, rapid staccatos, glissandos, stratospheric high notes, and pizzicatos placed quickly between other notes – she did all of it with a superb artistic interpretation. She conveyed the emotional depths of “Tzigane” and the charming elegance and fire of the “Introduction and Rondo Capriccioso.” Her “Tzigane” plunged and soared, evoking the sorrows and joys of a gypsy. She commanded a marvelous palette of tones that ranged from edgy and almost gnawing to whispery light to full-bodied yet lyrical to clear as crystalline glass. Her flawless technique and artistry was just flat out mind boggling, and generated a genuine and heart-felt standing ovation from the audience.

While both the Ravel and Saint-Saëns had dance-like moments that Akiko Meyers brought out, the orchestra, under music director Salvador Brotons, extended the dance-theme in the second half of the concert with Rachmaninov’s “Symphonic Dances.” The full-ensemble showed lots of muscle and drive with the loud, dramatic sections. The softer passages worked well most of the time, allowing the lovely alto saxophone to shine in the first movement. The strings created a lush sound with concertmaster Eva Richey spinning a beautiful sound in the second, and the French horns added luster in the third. A little more tightening up with the dynamics and clearing up a couple of intonation problems in the woodwinds would have made the piece even more enjoyable.

Filling out the dance card on the concert program were two of Dvořák’s “Slavonic Dances.” The orchestra led off with the gentle and nostalgic No. 10 and then galloped ahead with the wild and carefree No. 1. Guided by Brotons, the musicians made the music swell and subside with grace in the No. 10, but the violins weren’t always together when they executed the light and fast jumps. The orchestra dove into the bold opening statement of No 1 with gusto and seemed to have fun doing it as well.

An added feature of the concert was a brief and violent rainstorm, which pounded the roof of the concert hall during part of first section of “Tzigane” while Meyers was mining the depths of the cadenza. But the pummeling sound didn’t deter her one bit, and she captivated the audience with her incisive playing. Also the harpist played her entry very well and the orchestra followed with sensitivity to accompany Meyers.
Posted by James Bash at 10:36 PM