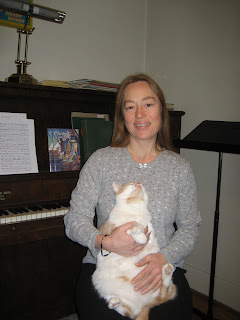 I published a profile of LeaAnne DenBeste, one of Portland's best sopranos and voice teachers, in the Hollywood Star newspaper. Although the Star is unavailable online, you can pick it up gratis at many locations in NE Portland. The Star publishes about 25,000 copies for each monthly issue, so it's considered one of the larger neighborhood newspapers.

DenBeste will be singing with Cappella Romana in its next concert on January 11th. The program consists of Finnish Orthodox music, most of which has probably been rarely performed outside of Finland. So, if you want to hear some really unusual vocal music, check out this concert.

The picture shows LeaAnne with Clare Marie.
Posted by James Bash at 2:41 PM