Make it a SuperBach Sunday! 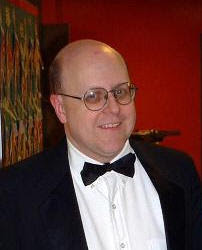 Bach’s Cantata 19 is “Es erhub sich ein Streit” (“A battle arose”) and is based on the story of war in heaven in Revelation.

Canata 41 is “Jesu, nun sei gepreiset” (“Jesu, now let us praise Thee”) and is considered one of the most difficult of Bach’s cantatas.

In the Bach Cantata Choir’s newsletter (called “Bach Beat”), Pitkin writes this about the oboe d’amore:

The oboe d’amore was invented in the 18th century, and the Bach cantatas showcase the instrument at the apex of its popularity. Interestingly enough, the first composer to write specifically for the instrument was Christoph Graupner, whose Concerto for Oboe d’Amore will be heard in the BCC’s next concert. In terms of performance, the oboe d’amore is probably the most difficult instrument to play in a family of difficult instruments. This is due in large part to the fact that it has an unstable pitch and a scale that is very out of tune with itself, requiring a great ear and extreme flexibility of embouchure (use of facial muscles and lip placement) on the part of the performer.
Its darker, warmer tone is used to great effect in the cantatas, and you’ll most often find it paired with solo alto; the lush sound of both alto and oboe d’amore work beautifully together. This instrument gradually fell out of favor with the advent of the clarinet, which has a larger range and is much easier to play. Very little music has been composed for the oboe d’amore since the end of the Baroque. The most notable examples are to be found in Ravel’s “Bolero,” Richard Strauss’ “Sinfonia Domestica” and Mahler’s “Ruckert-Lieder.”

There is no admission charge for the concert, but donations will be accepted.
Posted by James Bash at 10:34 AM