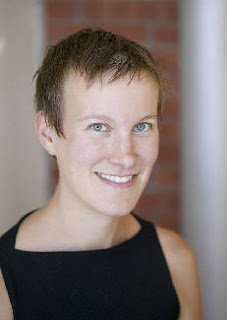 The Grammy’s will be announced Sunday, so it’s time to catch up with flutist Molly Barth, one of the founding members of Eighth Blackbird, whose recording “Strange Imaginary Animals” has been nominated for three Grammys (Best Chamber Music, Best Producer Classical, Best Classical Contemporary Composition).

So why did you leave Eighth Blackbird?

I left eighth backbird because I am much more comfortable with the lifestyle that I lead now. I don’t have to live half the year on the road, living out a suitcase, waiting around in airports, and being in hotel rooms and rental cars all of the time. And as Eighth Blackbird continues to be more successful, they will be on the road more and more. It’s already happening. When I left, the tour schedule was six months out of the year and now it’s eight.

Do you miss all the acclaim from the Eighth Blackbird concerts?

I get my chamber music kicks with Fear No Music and a new music ensemble that I’ve started with trumpeter Brian McWhorter from the University of Oregon. It’s called Beta Collide. We are a Pacific Northwest based ensemble, and we like the idea of being presenters as well as musicians. We’ll create each concert with a guest artist. We’ve got a weeklong residency at Stanford University that starts at the end of the month. We’ve invited Scott Rosenberg, a saxophonist from the Bay Area who is active in the free jazz movement, to perform with us. Scott bridges the gap between free jazz and contemporary classical.

Then on April 5th at Willamette University, we are performing a concert with Stephen Vitiello, who is a sound installation artist. He is the archivist for The Kitchen in New York City – a really funky, alternative venue. Vitiello teaches at Virginia Commonwealth University. So we have a lot going on already!


And you teach flute at Willamette University…

Yes, I have a fairly full studio with ten students. The people there are really intelligent and fun to spend time with. None of my students are music performance majors. The have a good work ethic. They really respond to what I say. They want to play music. I don’t have to twist their arms.

Yes, when I left Eighth Blackbird I realized that I was yearning for more variety. Now I’m teaching, doing chamber music and orchestral music. It’s wonderful.

So you have to drive a lot?

I live in McMinnville, and the drive is pretty awful sometimes. My husband percussionist Phillip Patti is a vintner and is a learning to be a vineyard manager. He performs with me in Beta Collide and with other groups like Fear No Music.

The Pacific Northwest has a lot of composers for you to work with.

Yes, I’m getting to know them. Playing new music is really fascinating. You’re collaborating with the composer. There’s a lot of give and take. I enjoy that.

It’s amazing that in the Oregon Symphony you have two new music ensembles that are drawn from the orchestra members: Third Angle and FearNoMusic. Not that many orchestras in the US have that kind of commitment.

Do you own several flutes?

I play a Burkart C-flute that I use all the time, a Burkart piccolo, and a Haynes alto flute from the 1950s that’s absolutely beautiful. When I decided to resign from Eighth Blackbird I thought of moving to Boston and going into flute-making. Most of the companies that make flutes are there.

Did you always play flute?

I started at the age of nine. In fourth grade we could play any instrument we wanted, but I was wearing braces at the time. My orthodontist told me that I could play percussion or flute, so I chose the flute. My parents are not musicians, but I was exposed to music at an early age.

Will you be attending the Grammy awards?

No. I won’t be going down to LA. I’ll be playing the Inside the Score concert on Sunday afternoon with the Oregon Symphony, and then I have to drive to Eugene to play with the Eugene Symphony later that day.

The life of an itinerant musician!

Yup! (Laughs.) Cross your fingers for Eighth Blackbird in the Grammys!
Posted by James Bash at 3:26 PM

Dear Admin,
I scan your website, its extremely impressive, I love it.
I have conjointly this connected web site.
The flute is a member of the wind family of music instruments. Originally, the first flutes were made of wood. In modern times, materials such as silver and other metals are used to make the instrument
Vukan milin
Best Regards
Lillian Hart