Daltirus, Porretta, and Grimsley team up to knock Seattle Opera’s Tosca out of the park 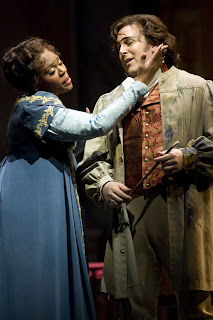 Seattle Opera lined up three strong singers for the principal roles on the opening night of “Tosca,” and each artist responded with career-enhancing performances. With soprano Lisa Daltirus in the title role, tenor Frank Porretta as her lover Cavaradossi, and Greer Grimsley as the evil chief of police, Puccini’s famous political potboiler got every ounce of superb sound and drama to make this opera thrilling and memorable.

Daltirus unleashed her pitch-perfect, radiant voice with stunning effect. From the top-most notes to those in the basement, she infused each one with plenty of passion. Her flirting with Cavaradossi in the Act I delightfully blended spontaneity, charm, and willfulness. Daltirus started singing the aria Vissi d’arte while lying down on the floor of Scarpia’s apartment and finished the aria in such a convincing state of despair that the audience erupted in deafening applause and shouting from all corners.

Porretta sang ardently with a warm voice that blossomed wonderfully in the upper register and filled the house. His Vittoria! rang out magnificently and his E lucevan le stele was a show stopper as well.

Grimsley does the creepy Scarpia with so much conviction that it’s a relief when Tosca stabs him. He has a terrific way of injecting pure evil into the tone of each word that he sings, and he emits a wheezing sound before he breathes his last breath.

The voices of all three leads balanced very well. One singer didn’t overmatch the other and all three of them swung for the fences.

Impressive in lesser roles were Jason Grant as the freedom fighter Cesare Angelotti, Peter Strummer as the lovable caretaker of the sacristy, and David Korn as the Shepherd Boy.

Conductor Vjekoslav Sutej paced the orchestra well and their playing was exceptional. The off-stage singing by Tosca and the chorus during Act II was so loud that it interfered with the singing of Scarpia and Cavaradossi.

Clear stage directions by Chris Alexander helped to shape the storyline. The scenery, provided by San Francisco Opera, placed the action in Rome around 1800. The opera opened in a large church and moved to Scarpia’s ornate apartment in the second act. The third act took place on the roof of the Castel Sant’Angelo and was dominated by the statue of Saint Michael with his sword pointing downward to the place where Tosca jumps to her death. All was spectacularly lit by designer Connie Yun, especially the final scene which became a panoramic silhouette against a darkened sky.

The costumes were traditional and tastefully designed by Andrew Marlay. The English captions by Jonathan Dean were excellent.

Special note: Lisa Daltirus sings “Aida” in Portland Opera’s production in May. She then returns to Seattle to sing “Aida” in the second cast in August. Also, Greer Grimsley performs in the Portland’s “Aida” as Amonasro and his wife, Luretta Bybee, sings the part of Amneris. Finally, Vjekoslav Sutej will conduct the performances.
Posted by James Bash at 11:50 PM